A land where the Bible serves as a tour guide's GPS 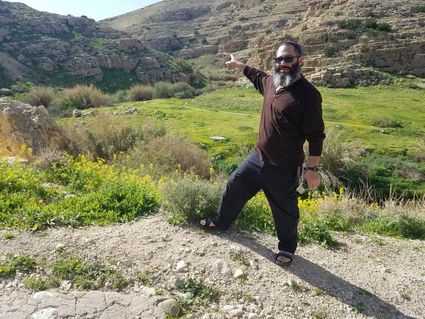 Daniel Gutman, a tour guide who has been leading groups around Israel for the last decade.

(JNS)-When you visit Nachal Prat, you can almost feel what it was like to be a seventh-century Israelite leading your donkey, its saddle bags full of water, to Jerusalem.

Nachal Prat, often referred to by its Arab name, Wadi Kelt, is nothing less than "a hidden gem both for its beauty and its sense of the past visible in every stone here."

So says Daniel Gutman, a tour guide who has been leading groups around Israel for the last decade. "It's in a place like Nachal Prat that the past comes alive before your eyes. You just have to know where to look."

Gutman knows where to look in great part because he doesn't embark on a tour without his trusty, well-thumbed copy of the Tanakh, which embraces the Five Books of Moses (what Jews know as the Torah), the Prophets and the Writings. "So much of what we see here can be found in these pages," he says. "What's amazing is that it was all recorded thousands of years ago right here."

Take Nachal Prat's Ein Mabua nature reserve, for instance, one of Gutman's all-time favorite destinations. It's a spot deep in the Judean desert, a hop, skip and jump from the small yishuv (village) of Kfar Adumim and some 15 kilometers from the larger city of Ma'ale Adumim, considered by many a Jerusalem suburb.

If traveling by car, you'll find Ein Mabua to be only 10 minutes from Highway 1, veering off the Jerusalem Dead Sea Highway onto Route 458. (Better yet, program your GPS or Waze for Ein Mabua National Park.)

Gutman points out signs of the many conquerors who have claimed this place as their own: The mosaic floor was a gift of fifth-century Byzantine Christian monks who built a monastery here. The blocks of stone alongside the roads and trails were souvenirs of small Jewish outposts from the seventh century BCE. The aqueduct reminds us that King Herod's engineers used to transport water from this freshwater spring to the king's winter palace in Jericho. The swimming pool and buildings (now used as a gift shop, snack bar and public bathrooms) are remains of the pumping station the British built here in the 1930s.

The reason this isolated desert locale was so popular? In one word, Gutman says: water.

The natural freshwater spring here in the desert was the kind that Moses struck the rock to release, Gutman reminds us, with enough water gushing forth to satiate the parched Israelites. This natural source of water was why the Hasmonean dynasty around 100 BCE, and later King Herod, built aqueducts to transport water to their winter palaces in Jericho. "Even in the worst draught, you can still get water here," says Gutman.

"It all makes sense if you have a modest understanding of physics and the geology of the region," he adds. Put together a 1,300-foot drop in elevation, a steep valley and an underground source of rain water that's been there for millennia. When that water finds ways to escape, that's how natural springs are formed.

"This water in the middle of the desert kept us alive in times of drought," he adds. The spring stops flowing a few times a day due to what's known as the siphon effect and is then replenished with a fresh supply of water. "That's why you have to keep an eye on your kids when they're swimming here since the pool will fill quickly."

Not only can you cool off in the pool, but you can picnic by the waterfall or take one of the marked hiking trails, including an ambitious 5-kilometer one that takes three hours to complete and rewards the visitor with some spectacular desert vistas.

While exploring, you may wish to take along Gutman's "guidebook" that offers insights into what you see around you. You'll find the area referred to in Joshua 15:7 as the border between the tribes of Benjamin and Judah, where it's referred simply as nachal (a Hebrew word for "river"). Or take a look at Deuteronomy 8:6 that speaks of the "good land the Lord is giving, of springs and underground water," and Jeremiah 13 when G-d tells the prophet to go to Prat. Though commonly translated as Euphrates, Gutman argues that it makes more sense that Jeremiah was sent here to Nachal Prat since he lived basically around the corner in Anatot (which the Arabs now call Anata).

"It feels connected just being here," says Omni Israel, the 28-year-old Israel Defense Forces' veteran who says he took the job at the gift shop for that reason alone. "I felt pulled here, for the beauty and the peace and quiet." So he left the big city, moved to the desert and took this job. "It's also a place that shows us we can coexist," he says. "The local Arabs and Bedouins who also come to swim remind us that we are not alone here." 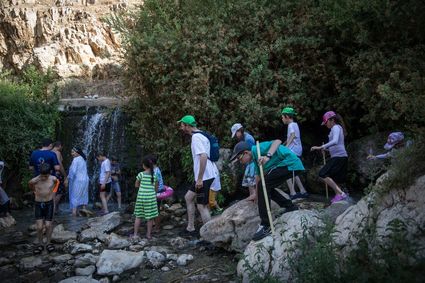 Israelis enjoy their summer holidays at the Ein Meboa Spring in the Prat Stream, Wadi Qelt, south of Jerusalem, on Aug. 16, 2017.

But the Jews who visit need look no further than their own history, Gutman adds. "Here, the Torah comes alive when you know what to look for," he says, pointing to a cluster of hyssop (esov) that the priests in the Temple would use for purification and which we read about on Passover as used to paint blood on the Israelites' doorposts to keep out the Angel of Death.

"You have the feeling this place, like the Torah, isn't ruled by human forces," says Gutman. "Being a tour guide in Israel is showing people their inheritance-a part of themselves they haven't had to opportunity to reclaim until now. The Bible is our GPS here because the children of Israel and the land of Israel are tied together by the Torah of Israel, making a three-strand rope that is unbreakable."