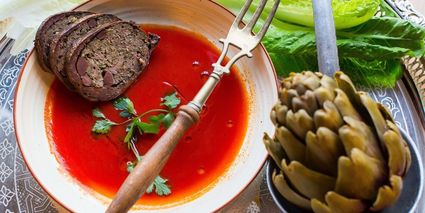 (JNS) Israel's adversaries in the BDS movement thought they could starve Israel through economic warfare that included even its food sector. Many remember the furor over SodaStream, Sabra hummus, ordinary fruits and vegetables, as well as Israeli cuisine and the country's culinary scene. But none of it has stopped Israel's restaurant sector from exploding into an audacious, red-hot success, now leading the planet in culinary excellence and bravado.

As far as the Israeli restaurant scene is considered, "BDS" stands for only one thing: "Breakfast, Dinner and Sweets." Across the country, Israeli restaurants sizzle with celebrity chefs and horizon-expanding culinary wizardry.

Decades ago, Israel's culinary scene was largely defined by omnipresent falafel, shawarma and pizza stands, tomatoes and cucumbers sliced with endless variation, carrot-juice vendors, over-glitzed coffee and pastry bars, and truck stop-style roadside eateries offering spiced Moroccan-style salads in drab arrays. Sameness and no sophistication were the main flavors of the day-every day. All that's over.

In recent years, highly trained and innovative (if feisty) chefs have been opening one trendy restaurant after another. Now hip dining spots can be found just about everywhere-from hotel rooftops with majestic views to disused warehouses, converted old homes, tight alleys and sidewalks, rooftops, seaside balconies, hilltop niches, spots overlooking the seashore, a hillside, or even a wall-and the sometimes just the cramped space between two other cramped spaces.

What is called "Israeli cuisine" is an undefinable fusion-on-steroids of 150 or so indigenous and immigrant cuisines that have left their traces on an unrestrained determination to re-imagine past foods for the palate of the future. Most ingredients are obtained within a 15-minute to 60-minute drive, meaning unparalleled same-day freshness. Unchained, and yet somehow tethered to a Jewish and regional past, today's Israeli cuisine blends European, Arabic and Asian traditions in a visual audacity that erases taste borders. Israeli celebrity chefs, such as Yotam Ottolenghi, Eyal Shani and Michael Solomonov have burned their stamps on kitchens worldwide.

Dinner can easily cost more than $100 per person. Tourists must compete with an estimated 21 Israeli billionaires-half of whom live in Tel Aviv-and more than 100,000 millionaires churned out by the nation's rarified startup and high-tech sectors. For more than 4.1 million annual tourists, reserving a table two to five weeks in advance is a must. (Of course, much of the charm of dining in Israel are local eateries in towns and villages across the country that are cozy, inexpensive and universally good.)

Almost 200,000 people work in the restaurant industry, about half of them waiters, which has created a teeming industry touching all. Restaurants mean employment to immigrant workers, average Israelis and Palestinians who have embraced the Israeli economy. Trendy restaurants are a national pastime and uplifting social force.

Ironically, with all the dining fervor, today there are fewer restaurants in Israel today than a few years ago. The high cost of doing business and the compulsion to achieve excellence has squeezed many restaurants out of business. Moreover, the cost and tribulations of official koshering is steep, and too often simply an unnerving pressure. Many restaurants now forego kosher certification.

Most impacting, recent tax rulings on employee pensions and tips have squeezed the entire industry. About one-third of restaurants close within their first year. Margins are carpaccio-thin. Asaf Lees, co-owner of Sucre Ltd. restaurant group, quips: "Opening a restaurant in Tel Aviv today is almost impossible without the power of suppliers."

Nonetheless, Israel still offers more than 6,200 listed restaurants at present, about 1,400 of which are in Tel Aviv. Jerusalem has a full stock of many of the rest.

Any short list of recommended eateries will be immediately assailed for leaving out 100 other recommended restaurants. But... three of Tel Aviv's best restaurants are operated by one company, Sucre Ltd., which combines celebrity chef flamboyance and leveraged buying power to succeed. All three require two to three weeks to secure a table. At the top is Kitchen Market, housed above a farmer's market at Tel Aviv's north port. Noisy and crowded, the establishment is overseen by celebrity chef Yossi Shitrit, who appears on his own popular culinary TV show.

Less cacophonous is the restaurant Mashya, located in a small hotel near the beach. Also under Chef Yossi's baton, it offers a more distilled environment, Mashya's presentations are just as style-revising. The third Sucre eatery is Onza, a raucous inside-outside Turkish eatery dropped into an alley in Jaffa's flea market area (the wonderfully named Shuk Hapishpeshim). Here the platters are sumptuous, and the music loud and rhythmic.

Jerusalem is also packed with must-try places. Atop the Mamilla Hotel with a spectacular view of the Old City is its Rooftop Restaurant. And the dignity and diplomatic history of Jerusalem is reflected in the unparalleled Shabbat lunch every Saturday at the King David Hotel.

Probably the most memorable eating experiences are squeezed together in the Machane Yehuda market. This ramshackle and vivacious convergence of food and all portable things sold in stalls was first established during the Ottoman Empire. You can purchase and often sample every type of exotic spice, olive, vegetable, meat or fish, cheese, bread, halvah, candy or pastry in a crowded atmosphere made electric with the unmasked pulse of Israel. On Friday afternoons, it is jam-packed, and much of the fresh produce is offered at lower prices so that it sells before Shabbat.

Nearby behold Machenyuda, Israel's wildest, most in-crowded and sought-after restaurant, which requires five to eight weeks for a table-that is, if they answer the phone and don't lose the reservation. Culinary mastery and innovation combine with loud music and an edge-of-the-world canteen atmosphere. If you order the insane dessert thing, prepare for shock sweets. See it here-no here... OK, try here. 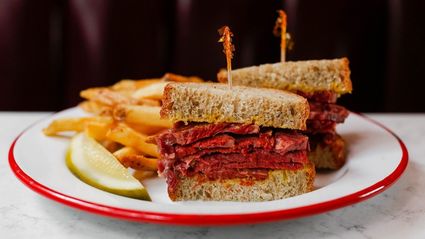 "The Rooster at a CooknSolo deli in Israel.

Finally, there are many emirs in Israel's restaurant scene. But only one sultan-Uri Buri, a simple cafe hidden on a dark corner at the far northern Akko coast. It is acclaimed as Israel's culinary mecca, recognized by gourmands everywhere. Guru founder Chef Uri Jeremias, sporting a massive white beard cascading down to mid-belly, is worshipped for the purity, simplicity, freshness and inherent power of his seafood creations. Celebrity chefs and food aficionados alike make the 90-minute pilgrimage north of Tel Aviv to this tiny stone structure to be reminded that where food meets the soul, the elusive human quintessence can be faintly, if fleetingly, discerned.

Whether one dines at the simplistic hummus cafes of Haifa or the exquisite Michelin-endowed concept restaurants of Herzliya, an inescapable conclusion accompanies the fare: Food is good for peace. Peace is good for food. No one makes war while enjoying a good meal.

Edwin Black is the author of IBM and the Holocaust, and a syndicated columnist who travels extensively, frequently reviewing the hotels he stays in. He personally and independently paid for all aspects of travel mentioned in this series. He can be found at www.edwinblack.com.