This octogenarian's leap from radio pioneer to mystery writer 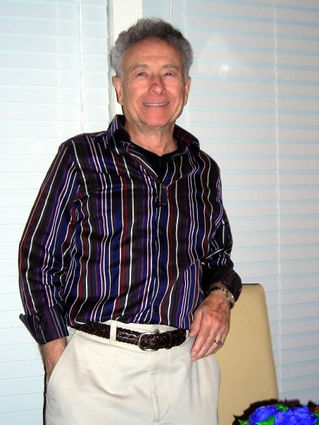 Being in his late 80s was not a deterrent for Longwood resident Bob Herpe to becoming an author of a fiction mystery novel. He'd worn many "hats" in his careers and enjoyed many experiences-good and bad-to equal a "full" life. A creative man, writing almost came second nature. He already had experience with writing commercials for Broadcast Radio (he has owned several radio stations across the U.S.), and he wrote kiddie television shows when he worked for CBS in Chicago. However, he never seriously thought of writing a book.

"One day I just sat down to see if I could do it. I said to myself 'I don't know if I can do it or not, but I've always done things I've never done before.'"

The result was the beginning of "Gravnick." The book's publisher, IRIE Books, states "Gravnick" is several novels woven into one. It is a love story, first and foremost, but also a twisted family saga of murder, disguise, trickery and greed."

What led Herpes to start writing? He will tell you it was his wife, Rusty, who was suffering from Alzheimer's disease.

"As it got worse, I had to keep my sanity. So I started to fool around with writing," he told Heritage.

He stopping working at Orlando's Y106.7 FM radio station, where he was the owner, in order to care for Rusty. "She was a very social person," he said. Herpe would take her for walks, kept her active in social life. "She'd talk to anyone, and we had a very diverse group of friends," he remembered. The results were that she knew people and knew things, but she would get very confused."

Asked if he considered writing a book about his successful experiences helping Rusty through the debilitating disease, he shared that he had thought of it and had a "first paragraph somewhere." Perhaps later he will get to that, he said. But right then, his escape from reality was to develop "Gravnick." And now it is to write the sequel to this novel.

As Rusty got worse he had little time to write, so he put it aside. "I never really thought about finishing it," he said.

After Rusty died, Herpe thought "What the heck," and dove back into writing. He heard about a writers' workshop in Las Vegas, New Mexico, just to see if he could get his "head grounded again." He showed a few pages he'd written to a publisher who told him "If the rest of this is as good as this, we'll publish it."

People often ask him how he wrote "Gravnick." "The truth is, I'm too lazy to write an outline," he said with a laugh. "What I did basically, was I got an idea for a character and started to write about him."

Herpe wrote Gravnick's whole life-what he was like, where he was from.

"I've got to know the character. How he would react to other people," Herpe shared.

After he "knew" his character, he wrote the end of the story. "I wanted a goal to go for. Then back to the beginning and just living life with him, wherever he went and whatever he did," Herpe said.

Creating Ernie Gravnick in the way Herpe did made his character believable-almost a real person.

Herpe grew up in Chicago's north side-"I was ecstatic when the Cubs won the World Series in 2016," he stated proudly-so it is no surprise that Herpe's character was born and raised in Chicago. Gravnick's father was Jewish and his mother was the daughter of Italian mafia Don Caesar Casilone. When Gravnick was eight years old, he witnessed the brutal murder of his father and grandfather during a family outing at Chicago's Brookfield Zoo.

Herpe's real life was nothing like Gravnick's life. Herpe was a pioneer in the radio industry and served as chairman of the National Radio Broadcasters Association and FM Broadcasters Association. He and Rusty moved to Longwood 40 years ago to operate the Y106.7 radio station. Asked if he every watched WKRP in Cincinnatti, he excitedly exclaimed, "That's the kind of radio station I had in Connecticut! The star disc jocky was Stoneman, and he was most of the time!"

Herpe's character was a detective and acting police chief for Chicago's upscale Highland Park suburb. As he confronts multiple murders, which seem to be connected, Gravnick is drawn into a web that may lead him back to his past and the deaths of his father and grandfather.

"Gravnick takes its readers into the darkest realms of revenge and exploitation," said the publishers. "But underlying everything is the search for love and redemption; once found, the darkness vanishes and the light shines through."

"With this newest experience," Herpe said, "I found I enjoy writing."

Herpe is currently working on the sequel to "Gravnick."

"Gravnick" is available on Amazon, at Barnes & Nobles and Books A Million. Also, follow Gravnick on Facebook.