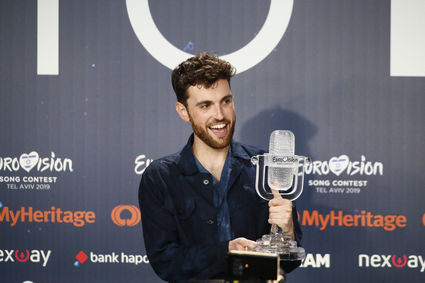 JERUSALEM (JTA)-The Netherlands won the Eurovision song contest 2019 and earned the right to host the international event next year.

Duncan Laurence sat behind his keyboard and sang his ballad "Arcade," which had been considered a favorite, and gave the Netherlands its first victory since 1975. Italy finished in second, Russia in third, followed by Switzerland and Norway.

Israel's Kobi Marimi finished in 23rd place out of the 26 countries in the finals with his ballad "Home." Marimi burst into tears at the end of his performance and received thunderous applause from his hometown audience.

The broadcast included all of Israel's former Eurovision winners, and was opened by Barzilai and Dana International, the transgender singer who won with "Diva" in 1998. It was hosted by Israeli supermodel Bar Refali, television host Erez Tal, reality television host Assi Azar, and television and radio host Lucy Ayoub. Actress Gal Gadot also made a surprise cameo.

Pop star Madonna performed two songs: "Like A Prayer," in honor of the 30th anniversary since its release, and her new song "Future," with guest star Quavo, which also featured a political statement on the Israeli-Palestinian conflict.

Each contestants' song was introduced with a short postcard featuring the artist dancing with Israel's top dancers at historical and beautiful sights throughout the country.