Undone by Brexit, May resigns 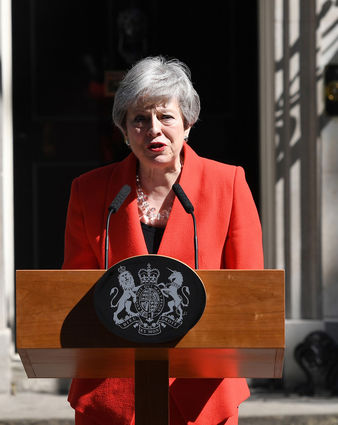 Prime Minister Theresa May makes her resignation announcement outside 10 Downing St. in London, May 24, 2019.

(JTA)-Theresa May, who announced her resignation on Friday as the prime minister of the United Kingdom, will be remembered as one of her country's shortest-serving and least popular leaders.

Blamed by supporters of Britain's departure from the European Union for delivering what they consider half measures, she was loathed also by opponents of that plan for her efforts to push it forward.

Ultimately, her desperate balancing act came to an end following the umpteenth failure in Parliament of one her many proposals for a compromise.

"It is and will always remain a matter of deep regret to me that I have not been able to deliver Brexit," May said in her announcement outside 10 Downing St. in London.

She is leaving with "no ill will but with enormous and enduring gratitude to have had the opportunity to serve the country I love," May said in conclusion of her speech, her voice cracking and tears filling her eyes as she uttered the final three words. She turned around abruptly and headed back toward the prime minister's residence, the sounds of her footsteps fading.

To her many opponents, May's resignation could not have come soon enough. But for many British Jews, the departure of May, who likely will be succeeded by another member of her Conservative Party after she steps down on June 7, means goodbye to one of the friendliest prime ministers in U.K. history.

"Prime Minister May followed a line of what you might consider leaders who are attentive and friendly to the Jewish community, as well as to Israel," said Jonathan Arkush, the previous president of the Board of Deputies of British Jews. Yet May, he added, "distinguished herself" even against that background.

The board's current president, Marie van der Zyl, published a glowing endorsement of May on Friday, calling her a "true friend" to the community and recalling how the United Kingdom under May has taken unprecedented positions in favor of the Jewish people and Israel.

Her Cabinet led the adoption of the International Holocaust Remembrance Agency's definition of anti-Semitism, which some anti-Israel activists reject for the ways it connects anti-Israel activity to anti-Jewish sentiments. It also has blacklisted the entire Hezbollah group rather than just its military wing.

In 2017, the United Kingdom under May said it would vote against a permanent article against Israel on the United Nations Human Rights Council. Last month, the rest of Europe followed in Britain's footsteps.

Last year, Prince William ended a decades-long unofficial perceived boycott on official visits to Israel by senior members of the British Royal House. May's government had a central role in facilitating the visit.

May has even clashed with the Foreign Office over Israel, imposing her own policies and successfully "diluting its institutional hostility toward Israel," said Jonathan Hoffman, a North London-based blogger and former vice chair of the Zionist Federation of Britain.

Diverging from the Foreign Office's attempts to appear impartial on the Balfour Declaration-a seminal document in the history of Zionism-May embraced it openly during the statement's centennial anniversary in 2017.

But one of her greatest gifts to British Jewry may have been what she appeared careful not to do: Namely, attempt to use the anti-Semitism crisis raging with the opposition Labour Party for the benefit of her own Conservative Party.

Accusations of anti-Semitism directed at Labour officials exploded following the 2015 election of the far-left politician Jeremy Corbyn to lead the party. It was a traumatic turn of events for many British Jews, who had considered Labour their political home.

Corbyn is an anti-Israel stalwart who has defended an anti-Semitic mural and said British-born "Zionists" don't understand irony. He attracted thousands from the far left to join Labour. Discourse within the ranks became so toxic that many Jews, including prominent Jewish lawmakers, left the party.

Through it all, May resisted the temptation to exploit the issue for political gain, Arkush said.

"It would have been very harmful had the fight against anti-Semitism become some sort of pawn," he told the Jewish Telegraphic Agency.

But as the ruling party, Arkush said, the Conservatives would have been wrong to ignore the problem altogether.

"We felt May had our back without leveraging the issue," he said.

Under May, the Conservatives limited their handling of the issue to the Parliament floor, where their representatives addressed the problem in queries and speeches.

"It was just the right strategy," said Hoffman, an economist who had worked with May when she was an employee of the Bank of England.

But May's own party has shown itself to be less than immune to racism and radicalization.

In March, 15 local Conservative politicians who had been suspended for posting anti-Muslim rhetoric were quietly reinstated. One of them called Saudis "sand peasants." Another compared Asians to dogs. In December, a Conservative Party complaints panel cleared May's former foreign secretary, Boris Johnson, of complaints after he compared women wearing burkas to mailboxes and bank robbers.

Johnson's comments did not go down well with Jewish community leaders.

A spokesperson for the Board of Deputies of British Jews wrote on Twitter: "Solidarity with the Muslim community over rising anti-Muslim incidents. Totally unacceptable, whether on the street or in our politics."

Johnson is a leading candidate to succeed May. He has been outspoken in his support for Israel, calling it a "miracle" during a 2017 speech.

Hoffman won't vote for May, either, because of his preference for a more "centrist voice" and her conduct on Brexit, which she vowed to advance after succeeding David Cameron. Both May and Cameron were opposed to the idea that the United Kingdom should leave the European Union. But after Cameron resigned in the wake of a national referendum calling for Britain to leave the EU, May stepped up to replace him with the stated goal of securing for her country the best terms for leaving.

It hasn't worked out well for May, at least in the House of Commons, the lower house of the Parliament. A majority rejected her plans at least four times.

These and other setbacks have exposed May to scorn, hatred and misogyny.

But true to her apparently endless ability to weather the abuse, May owned the disdain shown to her on social media and elsewhere, when she literally (and woodenly) danced her way onto the podium at a party event last year.

The ridicule may have partially backfired, producing sympathy toward May even among some of her critics. But her popularity remained low. In a poll from December, only 41 percent of respondents said she was decisive. It was the highest score she had received in polls since the 2017 elections, which she won narrowly.

Despite Corbyn's own image issues, he has increased Labour's strength in the House of Commons by 12 percent. The Conservatives, meanwhile, have lost 4 percent of theirs.

As for Hoffman, an economist, he said he won't support anyone committed to Brexit, which he calls "a tragedy if it happens." Instead of the Conservatives promoting the move, he and many other Britons want a second referendum on the issue.

If not for Brexit, Hoffman said he would have supported May.

"But right now that's a bit ridiculous," he said, "because British politics is all about Brexit-that's the only thing on the agenda."