A little Lebanese-American Christian defends Israel at the UN 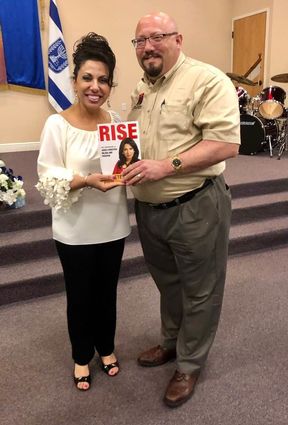 Brigitte Gabriel (holding her book "Rise: In Defense of Judeo-Christian Values and Freedom") with Dr. Daniel Layish at a recent ACT for America meeting held in Winter Springs, Fla.

It only took Brigitte Gabriel 14 minutes to make her point as she gave a keynote speech addressing the rise of global anti-Semitism before the United Nations in September 2014. She received a standing ovation as she spoke out strongly for Israel.

Spring forward almost five years, and Gabriel, through her organization ACT for America, is still speaking out strongly for Israel, democracy and Judeo-Christian values. She was recently in Orlando to promote her new book, "Rise: In Defense of Judeo-Christian Values and Freedom," in which she pointed out several of the points mentioned at the U.N. talk.

During her U.N. speech, Gabriel defined the "3Ds of anti-Semitism" introduced by Natan Sharansky more than 10 years earlier: demonization, double standard and delegitimization.

Demonization, she explained, is making bizarre claims that have no basis in reality. For example, the assertions that Israel is committing genocide against the Palestinians.

"If they are committing genocide against the Palestinans, why has the Palestinian population increased more than 600 percent since 1948?" she asked. "Israel must be the most incompetent mass murderer in the history of the world!"

When Israel is held to a standard that no other country would be expected to meet, that is a double standard and it is anti-Semitism.

Gabriel stated firmly, "The United Nations has spent years investigating Israel, while glossing over or ignoring massive and continuous human rights violations in Iran, Cuba and China to name only a few."

Delegitimization is to assert that the Jewish people do not have a right to statehood. "Israel has an historic and moral right to exist as a Jewish State. To deny the connection of the Jewish people to the land of Israel is antisemitism in its purest form."

Gabriel then laid into ISIS and Hamas.

"ISIS persecutes and kills members of every religion, ethnicity, nationalist community they encounter. They mean to terrorize anyone who does not submit to their version of Islam," Gabriel emphatically stated.

Hamas has been waging the same war against Israel for decades. The only difference between Hamas and ISIS, Gabriel said, is that ISIS seeks a worldwide caliphate, while Hamas is focused on the destruction of Israel. Hamas' charter says clearly "Israel will exist and continue to exist until Islam will obliterate it."

Quoting from the Ibn Hanbal compilation of hadith, Gabriel said, "The day of judgment will not come about until Muslims fight the Jews. ... Stone and trees will say 'there is a Jew behind me, come and kill him."

To which she proclaimed, "There is only one problem, in Israel Jews don't hide behind stones and trees. In Israel, Jews stand up and defend themselves. Israel has learned that if someone repeatedly says they will kill you, Israel knows they mean it-the world is just now learning this."

Gabriel encouraged "the civilized world" to band together in solidarity. The goal: to ensure that people of all faiths can live in peace and harmony and that Jews are never persecuted and victimized by barbaric ideologies.

"That Jews can walk in any street in the world with their head held high and say that Israel-the Jewish State and only democracy in the Middle East-will continue to shine as a beacon of light in the darkest region of the world."

In Orlando, Gabriel spoke to a standing-room-only crowd of Christians and Jews about Israel, terrorism and immigration.

With more than 1 million members, ACT educates people about the worldwide threats by ISIS, Hamas, Hezbollah, Fatah, the PLO, Boko Haram and any group that will kill those who do not follow their beliefs.

Gabriel has experienced terrorism. Caught in the Lebanese Civil War in the 1970s, she lived in a bomb shelter for seven years-from the age of 11 to 17-enduring the attacks by the Palestine Liberation Organization. When her mother became ill, Gabriel took her to a hospital in Israel. She was shocked to see Israeli doctors caring for injured Palestinians.

"The doctors did not see religion, nationality, political affiliation. They saw people in need," she told Heritage. "As I got to know about the Jews and their love for life and humanity, I learned how the Jews learned in the Torah how to make the world a better place-Tikkun Olam. That's what drives the Jewish soul, to love people."

Years later, Gabriel immigrated to the United States and became a citizen. She felt safe-until Sept. 11, 2001. After the world saw the planes fly into the Twin Towers and the Pentagon, she knew she wasn't safe even in America.

Her 10-year-old daughter asked her the same question she had asked her father in Lebanon, when she was the same age: "Why would they do this to us?" Her answer was the same as her father's: "Because we are Christians. The Muslims consider us infidels and they want to kill us."

It was then Gabriel decided to do something about this hatred and founded ACT for America in 2007. Since then, she addressed the United Nations, members of the U.S. Congress, the Joint Forces Staff College, the FBI and other groups educating and encouraging people to act to stand up against the violence of radical Islam.

ACT has been misconstrued as a hate group. When Heritage asked her about that, Gabriel replied, "You bet your bippy we are a hate group! We hate murderers, pedophiles, those who kill innocent people as at the Pulse night club, mistreat and hang gay people, and perform female genital mutilation."

ACT for America has also been called anti-Muslim. Gabriel does not point a finger at the 60 percent of American Muslims living peacefully within their communities. She zeroes in on radical Islam that is attempting to destroy our Judeo-Christian values.

Mohamad Tawhidi, an Iranian-Australian Muslim religious leader and Islamic reformer, who is president of the Islamic Association of South Australia, supports ACT's endeavors. He has spoken in support of ACT in Seattle and Virginia Beach and endorsed Gabriel's book "Rise," saying: "Brigitte Gabriel is an icon of American Bravery. Her courageous stands in the face of corruption stiffen the spines of American patriots who want to see their beloved country excel and advance in the best ways possible."

Gabriel is concerned about Americans who will not see the problem-hiding heads in the sand, pretending a problem does not exist or too afraid to be labeled "Islamophobics" when addressing the real cause-radical Islamism.

"When in the world did you ever see any problem disappearing because people sat along the sidelines and waited for the problem to go away?" she asked.