Remembering my dad-boats, bugs, bats, and all 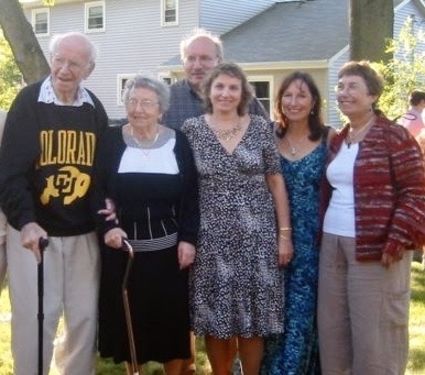 Ten years ago this week, my father and I spent our last Father's Day together. My mother and he had moved up to an independent living facility in Upstate New York four miles from me. Two years later, his health had deteriorated, and he passed away November 2008. People may remember Bill Cohen for his stores in Keeseville, his community service, his pride in his family. What I remember-and treasure-about Dad were the stories about him that my siblings and I share again and again. Many of them centered on boats, bugs, and bats.

Having spent summers as a child on Lake Champlain, my father always dreamed of owning a boat. In 1965, he purchased a pink indoor-outdoor that my mother immediately "christened" Nisht Neytik, Yiddish for "not necessary." During the summer, Dad rented space on a public dock in Port Kent, five miles from our house. And each Sunday, Dad would coerce us all to take a ride-when we could go. Unfortunately, the boat spent more time in the shop than in the water. And when it was in the water, Dad was always panicking about the weather or the gas situation. One time, we took a long ride out to a nearby island, and my father realized that we might not have enough gas to return. We were nervous wrecks until we finally pulled back into our slot.

In 1966, my parents bought a cottage on Willsboro Bay. Soon after, Dad purchased an outboard with slightly better reliability. Larry and I were married in 1974, and in 1975, we went up to the lake for Memorial Day. Dad gave Larry a pair of waders Dad had picked up second hand and asked him to put up the docks for the boat. Before Larry was knee deep, the waders-riddled with tiny holes filled up with water. Think Lake Champlain in May, when the water temperature barely reaches 60 degrees. Larry has never forgiven him.

For the next several years, the boat was anchored either on the dock or on an anchor about 200 feet from shore. Dad still loved boating, but only if the weather was perfect. For hours before we were supposed to go out, Dad kept his ear near the radio next to his chair, which was set for the weather station. If there was the slightest chance of rain, he refused to go through with the ride. When we children (and eventually our spouses) were old enough to go on our own, Dad installed a CB radio in the outboard so he could check up on us every few minutes. In a blatant act of defiance, Larry would turn it off. Dad never forgave him.

As much as my father loved boats he despised bugs. He kept a can of Raid next to his favorite chair on the back porch of the cottage and used it frequently-and liberally- to kill any passing fly or wasp. When the Raid wasn't enough, he got an outdoor fogger, which he used with the same careless abandon that he used with the aerosol can. One beautiful summer night, my sister Laura was putting food on the table when my father passed by the outside of the open window with the fogger in his hand. A potent cloud of pesticide permeated the air. Laura never forgave him.

When the Raid and the fogger failed, Dad called in the Big Guns. He purchased an electric bug zapper and hung it on the limb of the huge oak in front of the cottage. As the sun set across the lake, we heard from inside the cottage a quick zap as the first bug hit the grid, then a second, then 10, then 20. Before we knew it, every bug between Willsboro and Burlington five miles across the lake was headed for the bug zapper. It took about 30 minutes for the 10-foot machine to become completely clogged. So much for Dad's war against the bugs.

Dad was more successful with bats. The cottage was always a gathering place for the family. One summer weekend, Larry and I were in one bedroom; my sister Bobbie and her husband, Emil, were in another; and Laura was in another. In the middle of the night, I headed to the bathroom. As I reached for the toilet paper, I realized that a bat was sitting on the top of the roll. Trying not to wake anyone, I ran back into our bedroom and shook Larry awake.

"There's a bat in the bathroom!" I whispered.

Larry awoke groggily with a "Wha...t?" He climbed out of bed, checked out the bat in the dim light of the nightlight, and suggested we close the door and wait until morning.

"But what if someone else has to go to the bathroom?"

"What are you two doing?" Our whispered conversation had woken up my sister.

The bat, tired of squeezing the Charmin, flew out of the bathroom and began swooping through the cottage.

By this time, Emil, Laura, and Mom were wide awake. We watched the bat circle above us, all of us talking at once with suggestions of what to do.

"Hit it with the badminton rack?"

"How about a broom?"

"Does Raid work on bats?"

"How about the fogger?

At that moment, my father, who can sleep through a five-alarm fire a block from our house (Yes. He did. Keeseville, New York, Feb. 14, 1964.) But I will save that story for another time), finally appeared in the doorway of his bedroom in his teeshirt and boxers. Without a word, he crossed the room, grabbed the fishing net that he kept in the corner explicitly for this purpose, and in one fell swoop, caught the bat in its web. He opened the front door, shook the frightened but still alive bat out of the netting, and came back into the cottage.

"Now everyone go back to sleep," my father stated.

Boat lover. Bug hater. Bat rescuer extraordinaire. But most importantly, My Dad. Whether he is with me or not, I will celebrate Father's Day in his memory with love.