Comfort and prayer for Israel's president 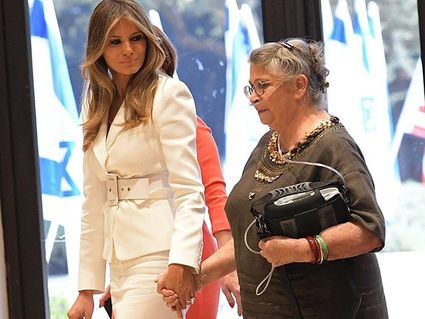 Israel's current and 10th president is Reuven (Ruby) Rivlin. He was elected to a seven-year term five years ago this week. He has a long and remarkable family life and political career in Jerusalem. This week his wife, Nechama, of nearly 50 years, died. As per Jewish tradition, she was buried and eulogized the next day.

Based on an outpouring of love and condolences, Run for Zion is enabling Christians and others who love and support Israel to send their condolences and prayers to President Rivlin and his family. Please write to prayers@runforzion.com to share yours.

Israel's First Lady, Nechama Rivlin, died the day before her 74th birthday on which she was laid to rest in a state funeral at Jerusalem's Mount Herzl national cemetery. She was eulogized by her husband, President Reuven Rivlin, who began his remarks by acknowledging her birthday.

"My Nechama, our mother. I got up this morning-you know that I didn't manage to sleep-I looked at the date that is so familiar-June 5. Happy birthday, my dear. Sad birthday. To you, Nechama, my wife, to you Nechama, my love, I'm having a hard time accepting that these are my parting words... Thank you for being with me... thank you for allowing me to be the husband of the First Lady of Israel."

Born and raised in central Israel he lauded her adopting Jerusalem as her home, "You became more of a Jerusalemite than Jerusalem natives."

"You never wanted to be in the limelight, but you understood that as the president's wife you had a role to fill. You chose to support children with special needs, to stand alongside women without being a demonstrative feminist."

President Rivlin also acknowledged his children and grandchildren, who he said did not leave his wife's bedside "for one moment" over the past months of her illness, testimony to the kind of mother and grandmother that she was, and to the kind of family that they built over five decades.

Since her death it was revealed that no matter how long a day he had, or when his day ended, President Rivlin would visit Nechama in the hospital, every day.

According to Jewish custom, the funeral and seven-day mourning period (shiva) was open to the public. It's considered something righteous, even an obligation, to participate in a funeral and to comfort the mourners. In addition to being eulogized by Israeli political and religious leaders, Nechama Rivlin was also eulogized by many foreign diplomats. One of the president's formal roles is greeting and accepting the credentials of foreign ambassadors. The diplomats paying their respects is both a sign of affection for Mrs. Rivlin and the president.

Other than being First Lady, Mrs. Rivlin was an accomplished professional. She graduated from and worked for years as a researcher at the Hebrew University. After she retired in 2007 she learned that she had a severe lung disease and was the recipient of a transplant from a young Israeli man who died. Because of President Rivlin's political career including cabinet minister, and speaker of the Knesset, Nechama Rivlin was in the public eye for decades. She was highly regarded and stood out for her modesty and lack of pretense, and was known for her messages of reconciliation and peace. Recently, she would be seen in public appearances with a portable oxygen tank.

To the extent that Israel has a royal family, and other than his current role as head of State, the Rivlins are one of them. President Rivlin was born in Jerusalem during the British Mandate era as part of a family that has lived in Jerusalem since 1809. When his family arrived in Jerusalem, the population was in the tens of thousands. Over the centuries they became one of Israel's leading families and now represent hundreds of descendants who have left their mark on Israeli society in many ways.

He frequently tells the story of how his ancestors perceived that the coming of Messiah was imminent and wanted to be in Jerusalem. Among other notable things in his family, Rivlin's father is credited for creating the first Hebrew edition of the Koran. So central Jerusalem is to his family, he is often heard on the radio beginning interviews with "greetings from Jerusalem, the capital of Israel."

If you're not able to come and express your condolences in person this week, you can still join in comforting President Rivlin an extend your condolences by sending your personal prayers to prayers@runforzion.com.