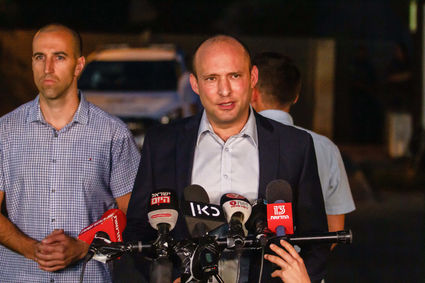 Naftali Bennett gives a statement to the media outside his home in Ra'anana on June 2, 2019, hours after being fired as education minister.

(JNS)-The campaigns for Israel's second elections in 2019 are underway and, after reviewing the first polls, many Israelis are asking if they may end up with a stalemate and no government following the second go-around.

Initial polling results indicate that the Israeli right will once again be the closest to form a coalition. However, the numbers also reveal that following the Sept. 17 elections, Israel may very well end up again in a situation in which Prime Minister Benjamin Netanyahu cannot form a government without both Avigdor Lieberman of the Yisrael Beiteinu Party and the ultra-Orthodox, thus leading to another deadlock in coalition negotiations.

As a result, reports are circulating that a number of parties on the right may be considering mergers, including two parties that did not cross the threshold in the April election.

Jeremy Saltan, director of English operations for the New Right Party that was led by Naftali Bennet and Ayelet Shaked-whose party was only roughly 1,000 votes short of the threshold in April-told JNS that he expects mergers on the right.

"My expectation is that this time around the party will not run alone and will run on a joint ticket," he said.

Similarly, Shmuel Sackett, co-founder of Moshe Feiglin's Zehut Party, which also failed to cross the threshold, told JNS that "the different approach which Zehut will be taking in these elections is simple. We are going to do everything we can to form a technical bloc with other parties that feel the way we do on issues regarding the Land of Israel. This will guarantee a strong bloc of those faithful to the Land of Israel in the Knesset."

There is a very clear reason why these two specific parties are the ones talking about significant changes and mergers.

The new elections were called because the prime minister only had 60 mandates supporting him (instead of the required 61) after Lieberman refused to join because of his disagreements with the ultra-Orthodox parties and their demands.

While all parties are asking themselves what they can do differently to change the result, the key to preventing elections for a third time likely rests in the hands of these two right-wing parties, New Right and Zehut. As a result, at least five right-wing seats could not enter the Knesset because these two parties didn't cross the threshold. The leaders of both of these parties realize that if those votes had not been wasted, Netanyahu would have been able to form a right-wing government without Lieberman.

Meanwhile, a survey conducted by Makor Rishon of national religious voters found that 56.7 percent want "a complete unification of all the parties on the religious right," which includes New Right, Jewish Home, Zehut, Otzma Yehudit and the Union of Right-Wing Parties.

Within the next few weeks, there should be a stronger sense for how these right-wing parties will merge. Still, there is no shortage of obstacles along the way. While they all agree about strong right-wing security policy, they differ when it comes to economic and social policies.

Knesset member Betzalel Smotrich, one of the leaders of United Right-a party into which both New Right and Zehut could potentially combine-created the greatest obstacle to a merger this week. He talked openly about his desire to be the next justice minister to enable him to lead Israel "back to the times of King David and King Solomon," in which Israel would be governed by religious law.

Neither Naftali Bennett of New Right nor Moshe Feiglin of Zehut, with its more secular platform, is unlikely to agree with that stance.

This and many other issues will need to be worked out in order to create a "mega-merger" on the Israeli right.

But one thing is for sure: Right-wing leaders are studying the results of the last elections, seeing Netanyahu's failure to form a government, and studying the polls as this new campaign begins. And they are going to approach the September elections differently to make sure that every right-wing vote counts, and that Netanyahu will be able to form a government without needing the help of his current archrival Lieberman.