Pompeo: Iran is responsible for attacking oil tankers in Gulf 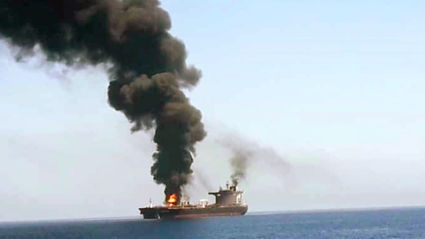 Two oil tankers were attacked on June 13, 2019, in the Gulf of Oman, less than a month after Iran was blamed for attacking four oil tankers off the coast of the United Arab Emirates.

(JNS)-Two tankers, one carrying oil and the other transferring a freight of methanol, in the Gulf of Oman near the strategic Strait of Hormuz were attacked on Thursday, less than a month after Iran was blamed for attacking four oil tankers off the coast of the United Arab Emirates.

Norwegian-owned tanker Front Altair and a Japanese-owned ship Kokuka Courageous were hit in the attack. The Norwegian Martime Agency said that three explosions were reported onboard the tanker.

"It is the assessment of the United States government that the Islamic Republic of Iran is responsible for the attacks in the Gulf of Oman," he said at a press briefing on Thursday afternoon at the U.S. State Department.

An unnamed U.S. official also said that Iran's claims to have rescued the crews of the ships are "patently false," and instead, that 21 of the crewmen from the Kokuka Courageous, operated by Kokuka Sangyo Co., were abroad the USS Bainbridge missile destroyer.

Iran's state-run news agency IRNA had claimed that the 44 sailors from the ships were rescued by Iranian Navy and are currently on the Iranian Island of Jask.

However, the Japanese operator of the Kokuka Courageous tanker that was damaged in the attack says all of its crew members are now safely onboard the Bainbridge.

The crew of the Bainbridge also reported that they saw an unexploded "limpet mine" on the side of one of the ships attacked, reported CNN, citing a U.S. defense official familiar with the situation.

These mines are the type attached to a side of a ship's hull using magnets. They were also suspected of being used in the May attack on four oil tankers off the coast of the United Arab Emirates.

The White House said that U.S. President Donald Trump has been briefed on the tanker attacks.

"The president has been briefed on the attack on ships in the Gulf of Oman. The U.S. government is providing assistance and will continue to assess the situation," White House press secretary Sarah Sanders said in a statement.

"I strongly condemn any attack against civilian vessels," Guterres told a Security Council meeting on U.N. cooperation with the Arab League.

"Facts must be established and responsibilities clarified," he added. "If there is something the world cannot afford, it is a major confrontation in the Gulf region."

"Some parties in the region are trying to instigate fires in our region, and we must be aware of that," Gheit told the Security Council.

The United States also requested an emergency meeting of the U.N. Security Council to discuss the situation in the Gulf, which comes amid heightened tensions between Iran and the America.

Trump pulled out of the 2015 Iran nuclear deal in May 2018 and has since imposed heavy sanctions on the Islamic Republic. He now seeks to block all oil exports from Iran.

This week, Japanese Prime Minister Shinzo Abe visited Tehran in what was widely seen as a bid to ratchet down the tensions between the two countries.

"There is [the] possibility of an accidental conflict, and a military conflict should be prevented at all costs," Abe said during a press conference in the regime on Wednesday.

For its part, Iran has continued its bellicose language, with President Hassan Rouhani saying that the United States would face a "crushing response" if it attacked.