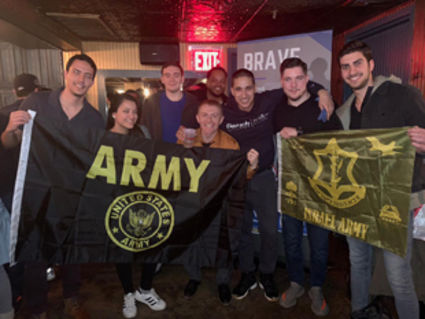 U.S. and Israeli veterans attend a social function as part of the "Brave" program that brings together vets to share stories, learn about the Jewish state and stand up against hatred and anti-Semitism on campus.

(JNS)-A new project called "Brave" is bringing together veterans of the Israel Defense Forces and the U.S. military with Jewish students to share stories, learn about the Jewish state, stand up against hatred and combat anti-Semitism on campus.

The initiative, organized by Hillel at Baruch College in New York City and launched this past semester, is also organizing trips for America vets to visit Israel, as well as Shabbatons for Jews and non-Jews to interact with one another-all with the goal of battling anti-Semitism by cultivating pro-Israel activists, says Ilya Bratman, executive director of the Baruch Hillel and a U.S. Army veteran.

"We hope to engage hundreds of non-Jewish veterans and student leaders in this project, so they go out in their community and become advocates for truth," Bratman, 41, explained. "They tell the real story of Israel. This program is part of this bigger effort to showcase what Israel is about and what the Jewish community is about."

He added, "Now dozens of non-Jewish U.S. veterans can go home and say, 'I know Jews, they're my friends. They're my brothers. They're my brothers in arms.' The hope is not just to build a community on campus, but to create advocacy much greater, much bigger. They can really dispel rumors and become advocates for the Jewish community and the State of Israel."

Hillel organizes the events and panel discussions-engaging hundreds of students on the quad at Baruch College-in order to build relationships with students from all around the world, including the Dominican Republic, Puerto Rico, China and Korea, who have now become advocates for Israel after spending time with Jewish students and the Jewish community.

"Brave" recently held its third subsidized trip to Israel for U.S. veterans and non-Jewish student leaders. Of more than 300 applications a year, they accept less than 10 percent.

'The most powerful moment in my life'

Among them is retired Army Staff Sgt. Trent Coyle, 36, a Baruch alum who says he used to be an atheist, but whose participation in Hillel and travel to Israel inspired him to convert to Judaism. Coyle met Bratman through Baruch College's Student Veterans Association, when Coyle was serving as vice president. He went to Israel for the first time ever in the winter of 2017 on a student leadership trip led by Bratman.

Coyle later studied abroad in Beersheva and participated in another trip to Israel with the Zionist Organization of America. He is now in middle of the conversion process, saying he decided to convert to Judaism "almost immediately" after visiting the Western Wall for the first time. He called the experience "without question the most powerful moment in my life."

"Ilya has been of great help on my own journey, whether it's helping me with my Hebrew homework, handling questions of faith or introducing me to rabbis in my desire to convert to Judaism," he told JNS. "Both of us have worked hard to help the Jewish community within Baruch create lasting relationships within the veteran community; I think that's what has proven to be most impressive."

Coyle had very little, if any, exposure to Jewish life or individuals before becoming active in Hillel and the "Brave" program. He said the Jewish community at Baruch always welcomed him "with open arms," and he has also seen other U.S. veterans become close to Jewish students and IDF veterans with Hillel's help.

"The more students going with Hillel to Israel or the more events we were doing together, there became a real understanding that there were shared values, and there were just a lot of commonality between the Jewish students and veterans," he said. "What I heard again and again [from the veterans] was that there was just a real sense of togetherness. Initially, it wasn't just go to Hillel and talk about Israel. It was just hang out, and eventually, the conversation started coming organically."

As U.S. veterans, he continued, "we understand what it means to serve-loyalty, duty, all these things-the same as the IDF veterans, and so we feel that there's an honest and real connection between these two communities."

Coyle said before his trip, he knew little about Israel beyond "some of the vague things that you read in the news, typically negative."

That changed after his visit, where he recognized similar values cherished by Americans, such as the sense of community, importance of family and tremendous respect held for veterans from all countries.

"It completely was not what I thought it would be," he said. "It was a wonderful experience. It really opened my eyes."

Steven D'Souza, 38, another alumnus of Baruch College and a veteran of the U.S. Marines, said he, too, had never interacted with Jews before getting involved in the project.

D'Souza, who is Christian, took part in the 2018 trip and subsequently became vice president of Baruch's pro-Israel club, YOFI. He said being part of "Brave" resulted in him finding "a sense of kinship" with the Jewish community. He even wound up taking some Hebrew classes and studied a little Talmud.

And he recently returned from leading a trip to Israel for non-Jewish college students, including some veterans, organized by a program that Hillel partners with.

"There are a lot of misconceived notions or just an ignorance about the Jewish religion, community and faith," he said. "By meeting people and getting to know their story instead of reading about it somewhere, it's like a firsthand kind of baptism in getting to know Jewish people, and getting emerged in the Jewish culture and language."

"One of my favorite moments about the Jewish community is Shabbat," he said, noting that during dinner, "you get a chance to talk. I think spending a meal with one another and getting to know one another is the best way that people can learn about Israel and know about what's going on there, and learn about Jewish faith and the similarities, and not just focus on the differences."

"There can never be enough conversations" about Israel, he added.

Coyle insisted that "people need those facts about Israel. Engage with as many people as possible and understand that there's more to Israel than just the army and other things. There are actual people behind all of this, and once people can relate to that, it becomes a great way of understanding."

Bratman also reiterated the important of building personal relationships between non-Jewish college students and those within the Jewish community, especially while they are still on campus.

"This is the final frontier, where we can talk to students before they become adults, before they go out to the greater community. This is an opportunity ... to tell people about the reality of the situation. We have literally dozens of veterans and non-student leaders who have become our family, and they will always stand with us, with the Jewish community and with the State of Israel."

"Brave" is made possible with funding from the Adam and Gila Milstein Family Foundation, and support from the World Jewish Congress.