Iran is very close to the nuclear threshold 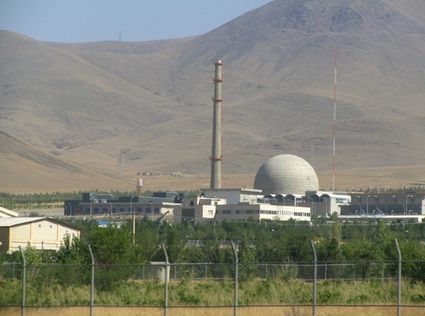 (BESA Center via JNS)-IAEA Director General Yukiya Amano confirmed on June 10 that Iran is realizing its threat to increase its rate of uranium enrichment, in direct defiance of the terms of the nuclear agreement of 2015 (JCPOA).

On May 7, Tehran threatened that if no solution was found to the problem of U.S. sanctions, it would ignore the restrictions on uranium enrichment placed on it by the nuclear agreement and enrich up to 20 percent. Two weeks later, on May 21, Iranian Atomic Energy Organization spokesman Behrouz Kamalvandi said the uranium enrichment capability at the Natanz plant had increased fourfold. As a result, Iran may soon exceed the limitation on the amount of uranium it is allowed to enrich under the JCPOA.

Former IAEA deputy director general Olli Heinonen recently stated, during a visit to Israel, that he believes Iran will be in a position to acquire nuclear weapons within six to eight months. He later clarified his remarks, explaining that he was referring to the time needed to enrich uranium in the quantity and quality required to produce a nuclear bomb.

Heinonen served as the IAEA's deputy director general and was head of its inspection department over the past decade. He was considered a hawk on the matter of Iran's nuclear program, in contrast to the feeble position toward Tehran taken by the previous IAEA director, the Egyptian Mohamed ElBaradei.

Heinonen's conclusion about Iran's proximity to the nuclear weapons threshold apparently stems from an assessment of its capabilities in two areas: first, its uranium enrichment capacity today versus its capabilities before the nuclear deal was signed on July 14, 2015; and second, the progress it has made since 2003 in the development of nuclear explosive devices in the AMAD program.

That program was intended to produce five 10-kiloton nuclear bombs (the size of the Hiroshima bomb in WWII) which could then be fitted onto the Shahab-3 ballistic missile warhead. This program was revealed when the Iranian nuclear archive was smuggled out by Israel.

After 2003, the nuclear program underwent various organizational changes to disguise its characteristics. It has operated since 2011 within the framework of the SPND organization, aka the Organization of Defensive Innovation and Research.

According to the IAEA's reports on Iran from 2013-14, before the nuclear deal was signed, the uranium enrichment plant in Natanz contained the following:

1,008 more advanced centrifuges of the IR2m design (which apparently has twice as much enrichment capacity as the IR1 design). These centrifuges have not yet been activated.

In addition, 2,710 IR1 centrifuges were installed at the Fordow enrichment facility, of which 696 were activated prior to the nuclear deal. They also enriched uranium from 3.5 percent to 20 percent.

It is reasonable to assume that if Iran breaks the nuclear agreement, it will-as soon as possible-restart all the centrifuges installed at Natanz and Fordow, as well as the advanced IR6  and IR8 model centrifuges that were developed in recent years. (According to Iranian experts, the enrichment capacity of the IR8 is 20 times greater than that of the IR1.)

Based on data published by the IAEA, it can be roughly estimated that if Iran breaks the nuclear deal, it will be able to enrich uranium to about 20 percent at the rate of about 450 kilograms per year. It would then enrich the 20 percent uranium to 90 percent (the level of enrichment required to produce a nuclear weapon core) in the quantity of 200 to 250 kilograms-sufficient to produce more than 10 nuclear bombs a year.

Based on the assumption that the time needed for Iran to restart a full-scale uranium enrichment project is three to four months, and adding a month or two for the production of enriched uranium cores in the form of hollow hemispheres, it can be estimated that within half a year Iran may have at least enough fissile material for one nuclear weapon core.

The IAEA has tried to monitor Iran's facilities associated with the production or use of nuclear materials, in accordance with the Treaty on the Non-Proliferation of Nuclear Weapons (NPT), but without much success. Most of the information gathered by the IAEA in this connection was received from Western intelligence services.

The most significant breakthrough in exposing the Iranian nuclear program was Israel's Iranian archive operation. Documents in that archive indicate that as long ago as 2003 and 2004, Iran made great progress in its nuclear effort, far beyond what the Western intelligence services and the IAEA estimated at the time. Had the information in the archive been exposed before the signing of the JCPOA nuclear deal in 2015, a better agreement would have been reached.

The Iranian nuclear archive operation and a comprehensive description of its contents were revealed by Israeli Prime Minister Benjamin Netanyahu on April 30, 2018. From October 2018 through May 21, 2019, the Washington Institute for Science and International Security (ISIS), headed by David Albright, presented a series of highly detailed reports on the contents of the archive, including information about secret facilities that had not yet been exposed. In addition to Albright and others, Heinonen was also involved in these revelations.

Key elements of the nuclear program were conducted at the Parchin military site, about 30 kilometers north of Tehran. The IAEA was informed in 2004 of the possibility that the site was conducting activities related to the development of nuclear weapons, and asked Iran to allow its inspectors to patrol it. At first, Iran evaded the request by claiming that it wanted to maintain military field security, as Parchin was a military base. However, in January 2005 it granted the inspectors partial access to a few buildings on the site.

The inspectors did not find any evidence of suspicious activity at Parchin. On their second visit (November 2005), which also involved only a small part of the site, they took soil samples. The IAEA's subsequent testing of those samples did not substantiate suspicions of nuclear activity at Parchin.

But in 2011, the IAEA received new reports that Parchin was testing explosives related to the development of nuclear weapons.

In May 2012, suspicious activity was detected at Parchin through satellite photographs: the Iranians had destroyed some of the buildings they had forbidden IAEA inspectors to visit in 2005. Not only that: they completely razed the areas surrounding where the buildings had stood.

The samples were reexamined in U.S. labs, however, and found to contain a few uranium particles-proof that Parchin had indeed seen nuclear activity.

Lt. Col. (res.) Dr. Raphael Ofek, a BESA Center Research Associate, is an expert in the field of nuclear physics and technology who served as a senior analyst in the Israeli intelligence community.

This column first appeared on the BESA Center website.