Auschwitz exhibit examines faith as a mechanism for survival 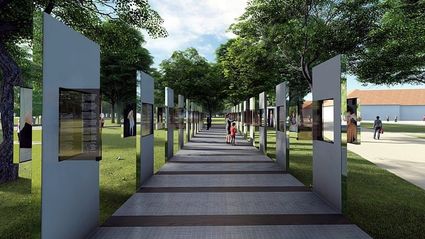 (JNS)—An exhibition that offers the public a glimpse into the role of faith as a mechanism for survival during the Holocaust opened at the Auschwitz-Birkenau State Museum in Poland on Monday.

“Through the Lens of Faith” was arranged and organized by the Amud Aish Memorial Museum in New York, which was founded by the Jewish philanthropists and businessman Elly Kleinman, and works to present the experiences of Holocaust victims and survivors, and how faith helped them persevere.

World-renowned architect Daniel Libeskind, whose previous projects include the Jewish Museum Berlin and the renovation where the Twin Towers stood in New York City, helped design the exhibit, which was installed on a path veering off the route leading to the Auschwitz Memorial and Museum.

The panels, each three meters high, line up on both sides of the exhibit.

The repetitive pattern of the panels is reminiscent of the stripes from a prisoner’s typical uniform, conveying a sense of internment. The exterior mirrored surfaces, however, reflect the surrounding landscape, evoking both physical and spiritual freedom.

Lustiger Thaler, chief curator of the Amud Aish Memorial Museum, interviewed each survivor, who was asked to share his or her experiences in Auschwitz, and how he or she survived through faith. The heroic accounts of each survivor are etched on their respective steel panels.

Rabbi Sholom Friedmann, director of Amud Aish Memorial Museum said: “This exhibit is unique as it not only focuses on the victims, but it introduces the role that faith played in these survivors experience. Faith enabled these victims to persevere in spite of the hell they were subject to. A powerful lesson for all to learn from.”

One of the supporters of the new exhibition— Jewish Russian philanthropist Viktor Vekselberg, chairman of the Board of Trustees of the Jewish Museum and Tolerance Center in Moscow—finds it especially significant, as 16 of his family members were killed in the Holocaust.

“Through the Lens of Faith” will run through 2020 to coincide with the 75th anniversary of the death camp’s liberation by the Soviet Red Army.