EL AL took to the skies in Orlando July 9 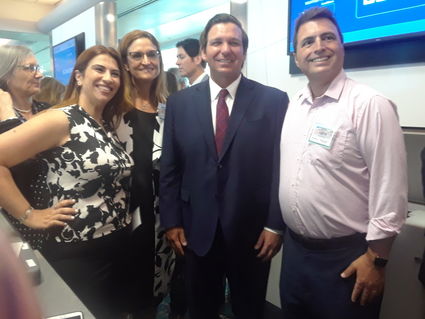 Driving to the Orlando International Airport the morning of July 9, the Star of David on the tail of an EL AL plane was visible above the building. It was thrilling to see, because this morning at 11:30 history was made as EL AL's inaugural flight from MCO to Tel Aviv took "to the skies," (EL AL literally means that).

Speaking first, Jaramillo shared the remarkable story of bringing EL AL non-stop flights to Orlando for the summer (and hopefully the future). It all started last January when Jaramillo visited her pulmonary doctor, Dr. Layish, who in conversation asked what she did for a living. She replied she recruited airlines to MCO. He asked, "why not recruit EL AL?" 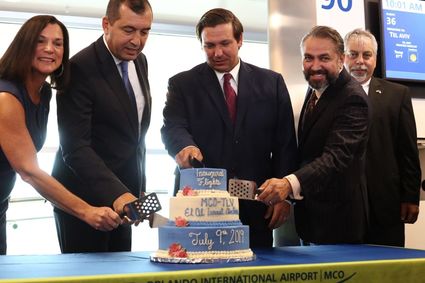 Around the same time, Elgrabli contacted her asking about incentives for air flights out of MCO. Without hesitation, Jaramillo contacted Layish, stating "Your wish might come true." Layish put the word out on social media and the next day, Jaramillo's email account was flooded with responses expressing interest in EL AL flights from MCO. After sharing this with the group, Jaramillo then recognized Staci Layish.

Gov. DeSantis spoke about his recent business development mission to Israel to meet with community leaders and small-business owners. Not only will the flights from Orlando be convenient for Floridians, he shared that the non-stop flight from Tel Aviv to Orlando is also beneficial for Israelis as Florida has world famous theme parks.

"I will say this though," DeSantis joked, "I think Israelis will pass on the Holy Land theme park, because I think they've got that covered from where they're coming from."