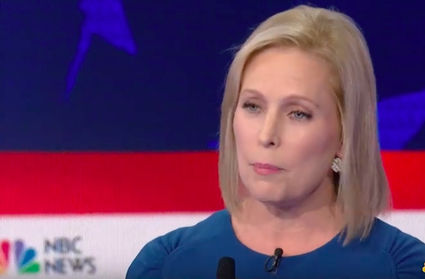 (JNS)-The second Democratic presidential primary debate on Thursday night barely featured a discussion on Iran, let alone foreign policy. However, New York Sen. Kirsten Gillibrand said that, if elected, her "first act will be to engage Iran to stabilize the Middle East and make sure we do not start an unwanted, never-ending war."

She also accused U.S. President Donald Trump for being "hell-bent on starting a war with Iran."

At Wednesday night's debate, the Iran deal was the only issue related to Israel or the U.S.-Israel relationship discussed at Wednesday's debate.

Like the first debate, other such matters, including anti-Semitism and Trump's pro-Israel policies, such as moving the U.S. embassy in Israel to Jerusalem or recognizing Israeli sovereignty over the Golan Heights, were omitted from Thursday's showdown.

During the second debate, Bennet slammed the Trump administration's policies at the U.S-Mexico border by evoking his mother's past.

"When I see those kids at the border, I see my mom, because I know she sees herself," he said. "Because she was separated from her parents for years during the Holocaust in Poland. And for Donald Trump to be doing what he's doing to children and their families at the borders... The president has turned the border of the United States into a symbol of nativist hostility that the whole world is looking at."

"One of the differences that Joe and I have in our record is Joe voted for that [Iraq] war, I helped lead the opposition to that war, which was a total disaster," he said. "Second of all, I helped lead the effort for the first time to utilize the War Powers Act to get the United States out of the Saudi-led intervention in Yemen, which is the most horrific humanitarian disaster on Earth."