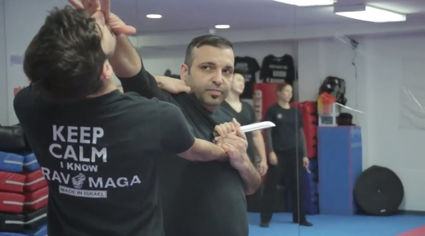 Avi Abraham, a Krav Maga instructor who teaches self-defense classes to synagogue-goers, shows how to combat an attacker in a promotional video.

(JTA)-When the ushers locked the door to the sanctuary, and the congregants prepared to flee the synagogue in preparation for a mass shooting, Rabbi Neil Cooper made sure it all happened before they had to take the Torahs out of the ark.

Ten minutes later the worshippers were back in the pews, doors unlocked, and getting ready to hear the weekly Torah portion. The first active shooter drill at this suburban Philadelphia synagogue was over.

"It was not a high-energy, kind of catching people off-guard kind of thing," Cooper said five days after the June 22 drill at his Temple Beth Hillel-Beth El in Wynnewood. "We also wanted to let people know, more than anything else, that we're on top of this. We have a procedure. We have people looking out."

After a span of eight months that included shootings at two synagogues, in Pittsburgh and Poway, California, congregations across the country are actively drilling their members on how to act if the terror arrives at their doorstep. Some, like Beth Hillel-Beth El, have run active shooter scenarios during services. Others have detailed plans in place should a shooting occur. Others have trained a group of congregants in how to fight gunmen when they come through the door.

The active shooter drills complement a range of other security measures that congregations have adopted since the Pittsburgh massacre, in which a gunman killed 11 worshippers in October. They have ranged from locking doors and reinforcing windows to hiring armed security. Some congregations have encouraged members to carry handguns at services, while others have installed new restrictions on carrying guns in shul.

"People very rarely rise to the occasion" in the event of a mass shooting, said Michael Masters, executive director of the Secure Community Network, an umbrella organization that provides guidance to Jewish institutions on security procedures. "They fall back to their level of training. Our goal is to give people a plan in their minds so that if an event happens, they have a toolbox they can draw from effectively."

The active shooter trainings often follow the mantra of "run, hide, fight," which means to choose one of those three options and commit to it-either running to a safe place, hiding somewhere secure or fighting the gunman. As the congregants at Beth Hillel-Beth El filed through an exit at the front of the sanctuary, opposite the doors, ushers locked the main entrance and triggered a silent alarm to the police.

The trainings complement active shooter drills that have been taking place for years at schools, including Jewish ones. Beth Hillel-Beth El's preschool has been running active shooter drills since at least 2013. Because the kids range from infants to kindergartners, sometimes keeping them quiet during the drill means hugging them or giving them lollipops.

"It not only makes it less scary to be playing the games, but it keeps their mouths active," said Judith Scarani, the temple's early childhood center director. "They're kind of muted by the lollipops."

In Salt Lake City, the Utah Highway Patrol gave Congregation Kol Ami, a liberal synagogue, a briefing on security procedures. While the briefing did not include an active drill, Rabbi Samuel Spector said just having a plan in place made people feel more comfortable.

"People were saying, 'OK, now I'm thinking about what my escape route would be,'" Spector said. "If I'm here, could I throw my siddur at the person? I think that a lot of people, at least that night, started to think about their plan."

Avi Abraham, an Israeli martial arts expert who teaches Krav Maga, the Israeli hand-to-hand combat technique, has taught self-defense courses to groups at more than 20 synagogues in the New York City area. His course consists of six hourlong classes for groups of congregants where they learn how to take down a shooter. He also offers the option of drilling the technique during services. The program costs $1,500 to $2,000.

Abraham teaches the groups how to collectively pounce on a gunman from the side as he's entering a doorway, then to tackle him and take his weapon. He said the technique depends more on "sechel," or good sense, than on physical strength. Those who aren't fighting, Abraham said, should lie on the ground so as to be out of the line of fire.

"In a few seconds, people find energy and willpower deep down to make sure they can protect their community," he said. "The whole point is do 'mesirut nefesh,'" Hebrew for fully dedicating oneself to a cause.

If a gunman were to enter a synagogue, would the worshippers have enough mettle to execute their training in the heat of the moment?

Abraham and one of his trainees both say yes, that adrenaline and focus would kick in when it counts.

"We're not done training," said Mike Sigal, the volunteer head of security for the Orthodox Congregation Anshei Shalom in West Hempstead, New York, who did the training with a group of 20 congregants and is himself a black belt in karate. "We're going to keep training. We're going to keep practicing this. It's got to become muscle memory, so you can alleviate some of that panic."

Those who have done active shooter drills say that, of course, pretending a mass shooting is happening does upset the intentional tranquility that Shabbat prayers aim to create. But rabbis sigh that at least they want to be prepared.

"This is not business as usual," Cooper said. "We just cannot do it like that anymore. We live in a world where it no longer can be assumed that things are safe, as unsettling as it might be. We have to run services in the world in which we're living and praying."