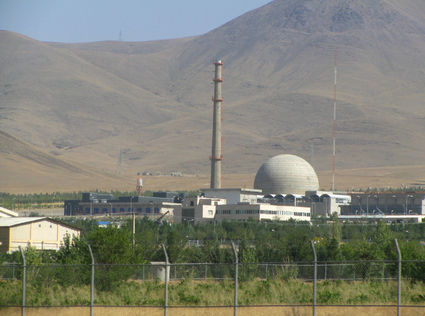 (JNS)-Iran has exceeded the uranium enrichment limit under the 2015 nuclear deal, the International Atomic Energy Agency announced on Monday.

Tzvi Kahn, senior Iran analyst at the Foundation for Defense of Democracies, told JNS that Iran's aim is to preserve relations with European allies in the face of the Trump administration's maximum pressure campaign against the regime since it withdrew the United States from the agreement in May 2018, reimposing sanctions lifted under it along with enacting new penalties against Iran.

"As a practical matter, Iran's breach of the stockpile limit is an incremental violation that does not significantly expedite its path to a nuclear weapon," he said. "Tehran's aim here is not to start a war, but to project strength, test U.S. resolve and ultimately weaken U.S. deterrence."

Kahn continued, saying "the regime also seeks to pressure Europe to restore economic ties with Iran, which have collapsed thanks to Washington's withdrawal from the nuclear deal. In this sense, Iran is engaging in nuclear blackmail, hoping to pressure the Trump administration to back down while stopping short of conduct that could prompt a more punishing U.S. or European response."

Barbara Slavin, who leads the Atlantic Council's Future Iran Initiative, told JNS that Monday's development was writing on the wall.

"This is exactly what they said they would do after Trump cancelled the oil waivers," she said, referring to the Trump administration deciding in May that it would not issue further temporary permission to countries over importing Iranian oil. "The step is incremental and reversible, and gives Iran leverage in any future negotiation."

"The catastrophic Obama Iran nuclear deal was built to allow Iran to cheat, both by making it difficult to detect violations and by giving other countries an incentive to dismiss those violations when they became undeniable," said Cruz on Monday. "Iran began exploiting the deal before it was even implemented, secretly preserving nuclear weapons infrastructure and openly violating limits on nuclear-related materials-only to have the parties reflexively ignore the violations, downplay them as minor, or provide still-confidential side deals and loopholes."

Taking it even further, Iranian Foreign Minister Mohammad Javad Zarif warned on Monday that Iran will further violate the agreement.

"Our next step will be enriching uranium beyond the 3.67 percent allowed under the deal," he stated. "The Europeans have failed to fulfill their promises of protecting Iran's interests under the deal."

The percentage mentioned by Zarif is a level fitting for producing civilian nuclear energy.

Moreover, the European Union announced on Friday that the Instrument in Support of Trade Exchanges, or Instex, a financial mechanism to evade U.S. economic penalties on Tehran, has been "made operational and available to all E.U. member states, and that the first transactions are being processed."

The waivers-extended to 90 days, down from the 180 days previously granted-were issued in May, and allow the signees to continue conducting nonproliferation work at the Bushehr, Arak and Fordow nuclear facilities.

Ahead of the waivers expected to be reviewed in August, U.S. National Security Advisor John Bolton and officials on Capitol Hill have increased pressure on U.S. Secretary of State Mike Pompeo not to renew them.

"The Trump administration should increase sanctions on Iran's nuclear program, first by ending the civil-nuclear waivers the State Department has been providing, which allow Iran to continue building up its nuclear program, and second by invoking the United Nations snapback to restore international sanctions and restrictions on Iran," said Cruz. "In the meantime, Congress should pass the legislation I've introduced to increase economic pressure on Iran by sanctioning the Special Purpose Vehicle built by Britain, France, Germany and Iran to preserve the Ayatollah's economic lifeline, and I will continue to work with my congressional colleagues to ensure that maximum pressure means maximum pressure."

In light of the latest Iranian violation of the nuclear accord, "European participants in the deal, which have warned Iran not to go down this path, will need to decide whether and how hard to press Iran to reverse course and what if any penalties they want to impose," wrote Eric Brewer of the Center for Strategic and International Studies. "Doing so risks provoking further Iranian nuclear advancements and could ultimately cause the deal to unravel-an outcome Europe is keen to avoid."

On Monday afternoon, the U.S. State Department responded, "The Iranian regime has taken new steps to advance its nuclear ambitions. The world's leading state sponsor of terrorism continues to use its nuclear program to extort the international community and threaten regional security."

"The Trump administration calls on the international community to restore the longstanding nonproliferation standard of no enrichment for Iran's nuclear program," added the department. "Iran has the uncontested ability to pursue peaceful nuclear energy without domestic enrichment."

The State Department warned, "As long as Iran continues to reject diplomacy and expand its nuclear program, the economic pressure and diplomatic isolation will intensify."

"The United States should continue its economic and diplomatic pressure on Iran, and our European allies should not reward Iran for its attempted blackmail," tweeted American Israel Public Affairs Committee. "Iran's ability to easily advance its nuclear program at its own pace and choosing is cause for concern. A future agreement with the regime must ensure that it does not have a path to a nuclear weapons capability."

Iran's ability to easily advance its nuclear program at its own pace and choosing is cause for concern. A future agreement with the regime must ensure that it does not have a path to a nuclear weapons capability.