A most unusual reunion 75 years later 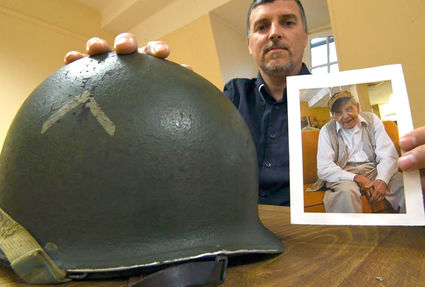 Jean-Frederic Voltz holds George Braunstein's helmet and a photo of Braunstein. This photo ran in a French newspaper, July 14, 2019.

In the middle of June, Heritage received an email from a French man named Jean-Frederic Voltz. The email stated that the writer had found a helmet that belonged to Private First Class George Braunstein. He explained that the soldier had been wounded on Nov. 26, 1944, in "Lalaye 15 Km near St Die in France." He even knew Braunstein's laundry number, which was in the helmet, and said Braunstein was a member of the 103rd US-409 Regiment-Compagnie [sic].

"Have you more information of this soldat [sic], he's not dead, he is resident of Kinneret (?), his address (?) Thank you."

The email was indeed curious and was almost deleted, regarded as a scam. However, on second thought, it was forwarded to Sharon Weil, director of Programming and Development at Kinneret, who immediately emailed back, saying she would follow up.

As it turned out, Weil, who rarely has time to visit with the residents, had just been spending time with Braunstein. To make it even more astounding, he had been telling her about being hit in the neck by shrapnel flying from a bombed church steeple in a battle at Alsace, France during the war.

When Weil read the email, she printed it out, took her camera and went back to Braunstein. She read the email to him and videoed his reaction.

Braunstein became emotional, and was surprised-"How did he find me?" he asked dumbfounded. "I think it's remarkable that he's even interested!" Braunstein said.

To add to this good news, Braunstein's 96th birthday was the next day, June 26.

Weil sent an email to Voltz to inform him that Braunstein did indeed live at Kinneret and that he was thrilled to receive this news. She then asked if Voltz could send the helmet to Braunstein.

In the meantime, Voltz contacted the French news media and journalist Margaux Sieffert wrote the story, which ran in a French newspaper on July 14.

"Soldier Braunstein found by an Alsatian, 75 years after the battle," read the headline. Braunstein's helmet had fallen into the right hands. Voltz has loved American history since he was 15, and while shopping at a local flea market in the Observatory in Strasbourg, he accidently discovered the helmet. It was June 5 (the date is etched now in Voltz's memory) when he came across the American helmet from the 103 Infantry Division (aka Cactus Division).

"There may be five people in Alsace who can spot this type of armor," he told Sieffert. "This is the only regiment in the U.S. Army to enhance it as a divisional reconnaissance. Others do not, especially to avoid sniper fire." Voltz bought the helmet for 200 euros ($224.34).

The helmet was first discovered in a closet in Rambervillers, France, by a "second-hand" dealer who gave it to a colleague in a garage sale, who in turn sold it to Voltz in Strausbourg.

How did Voltz finally find Braunstein? Examining the helmet, Voltz found the registration number and the letter "B" inscribed on the chinstrap. He began his search for the helmet's owner, without much hope of finding him alive. "In principle, when we find helmets, their men have died for 40 or even 50 years," he said.

The search was also tedious. The 103rd Infantry Division had about 9,000 soldiers enlisted. Voltz checked with the Pentagon Archives, National Archives and Records Administration Veterans files. Then he came across the Cactus Division's Journal of Markets and Operations (on the Internet).

"This is a document that chronicles the daily events experienced by each army group, such as the name and serial number of the various wounded," Voltz said.

After three days of research, Braunstein's registration number matched that in the helmet. "For the month of November 1944 alone, the Medical Battalion attached to the 103rd Infantry Division had about 1,583 invalids, including him," Voltz stated.

Voltz's research also revealed that the Cactus Division liberated the city of Saint-Die-des-Vosges Nov. 22, 1944. Four days later, Private Braunstein, then 20, was wounded in the area of Lalaye and Fouchy, in the Lower Rhine. When he was evacuated, his helmet was tossed aside. A local resident found the helmet, which then was shelved in his closet for 75 years.

Having all this information, Voltz continued his search for Braunstein. Learning that Braunstein lived in a retirement home in Orlando, Voltz sent the email to Heritage-a logical stab in the dark-and the connection was made. 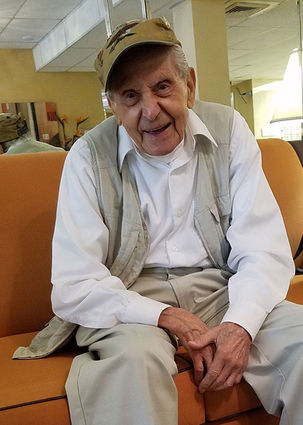 Braunstein's tour of duty was not over after he was wounded. He returned to battle after his recovery (with a new helmet) and was sent to fight in the Battle of the Bulge in Belgium. That was the German army's last major offensive on the Western front. In the spring, he was among the troops that made the final move into Germany and forced their surrender. His unit crossed the Rhine and moved into Bavaria, part of the forces that liberated the Dachau concentration camp earning him a Bronze Star Medal.

Fox News carried this remarkable story, which was televised Friday, July 19. "History is the main ingredient of the future. Most people don't care about history at all," Braunstein told Matthew Trezza, Fox 35 Orlando.

Voltz hopes to one day meet Braunstein. "In my eyes, there is still a link," he told Sieffert. "The head of the establishment (Weil) also told me that he often spoke of the war. I would love to meet him, I even think to go there."

Weil said they are working with Voltz to get Braunstein's helmet back.