Delivery of Russian S-400 system may have 'major ramifications' 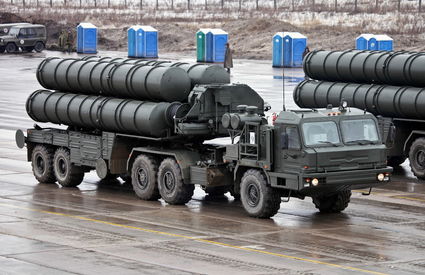 (JNS)-Turkey began to receive the S-400 air-defense missile-defense system on Friday despite U.S. warnings not to do so. The move by Turkey is likely to have "major ramifications" for the U.S.-Turkish relationship, according to Aykan Erdemir, a senior fellow at the Foundation for the Defense of Democracies.

"Turkey will no longer be able to receive F-35 stealth jets and Turkish companies removed from the F-35 supply chain will lose $12 billion of revenue. Also, the United States is likely to impose CAATSA sanctions against Turkey, which will further undermine U.S.-Turkish trade and defense cooperation," he told JNS.

The move could also bring negative financial consequences for Turkey, which may be headed for an economic collapse similar to Venezuela, according to analysts.

"The F-35 move could prove to be a costly mistake for [Recep Tayyip] Erdogan, especially during Turkey's ongoing economic downturn. Expected U.S. sanctions will undermine investor confidence at home and abroad, and exacerbate the country's economic woes by triggering a new wave of capital flight," said Erdemir.

According to the Turkish Defense Ministry, materials arrived at the Murted Air Base. A second shipment of equipment is expected to arrive in the near future, reported Russian state-run TASS news agency, citing a military diplomatic source.

The source said that a third delivery, consisting of more than "120 anti-aircraft missiles of various types" will arrive in Turkey "tentatively at the end of the summer, by sea."

CNN reported that "TASS also quoted the source saying that Turkish S-400 operators will travel to Russia for training in July and August. About 20 Turkish servicemen underwent training at a Russian training center in May and June, according to the source."

'Defying repeated warnings' from the U.S.

Turkey went through with the acquisition, defying repeated warnings from the United States, which has blocked the sale of the F-35 fighter jet in response, in addition to threatening sanctions on Ankara.

Michael Rubin, a former Pentagon official, told JNS that Washington should no longer view Turkey as an ally.

"Erdogan pulled the trigger but that's fine: Turkey is more a liability than an ally. Now it's imperative that policy makers recognize Turkey is no ally. It's essential to calibrate U.S. policy to reality rather than wishful thinking," said Rubin.

"After numerous attempts by the United States to convince Turkey from purchasing and delivering the Russian S-400 missiles, Erdogan decided to take his own path. Congress, and the Administration must respond to such actions with sanctions against its defense industry and economy. American service members, technology, and allies are now under threat thanks to its so-called NATO ally."

Abdulkader remarked that "Turkey is no longer a reliable American ally, and NATO is at risk," and that Friday's development "is a clear violation" of the Countering America's Adversaries Through Sanctions Act.

"A gradual withdrawal from Incirlik air base by the U.S. should also be on the table," he added. "Russian influence is here to stay in the new Turkey."