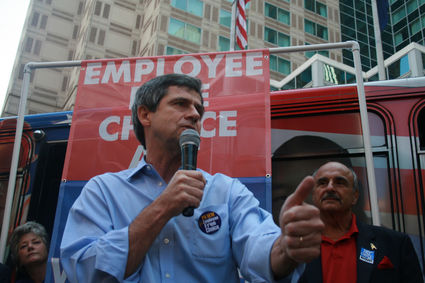 (JNS)-Former U.S. Rep. Joe Sestak, who is running for the Democratic nomination for president in 2020, said on Friday that, if elected, he would undo US. President Donald Trump's relocation of the U.S. embassy in Israel to Jerusalem-the first candidate running next year for the highest office to explicitly say so.

"We need to move the embassy back out of Jerusalem, but with the understanding that, ultimately, I believe we need to have the capital be there," he continued. "But it needs to be worked out in a two-state solution and then our embassy needs to be there."

"I believe you should always engage."

However, said Sestak, "if an error has been made" in moving the embassy, "it should be corrected and then we should proceed forward of making sure that we can achieve a two-state solution."

Sestak is one of the 15 candidates who've said that, if elected, they would re-enter the United States into the 2015 Iran nuclear deal, which Trump withdrew from in May 2018, re-imposing sanctions lifted under it in addition to enacting new financial penalties against Tehran.

"America broke its word," he said. "We must keep our word and, as long as they have not violated it, so that's why I support getting back into the accord."

However, the International Atomic Energy Agency announced earlier this month that Iran has exceeded the uranium enrichment limit under the nuclear agreement.

Sestak has said he would be open to taking military action against Iran only after trying to diplomatically resolve the threat.

He also told JNS that he would be open to undoing other moves by the Trump administration, including restoring U.S. taxpayer assistance to the Palestinian Authority and the United Nations Relief and Works Agency (UNRWA), which was defunded in March 2018 and the following August, respectively; having the United States rejoin the United Nations Educational, Scientific and Cultural Organization (UNESCO) and the U.N. Human Rights Council, which it left in January 2018 and the following June, respectively, due to their anti-Israel bias; reopen the Palestine Liberation Organization Mission in Washington, D.C., which shuttered in October.

Regarding U.S. funding to the Palestinian Authority and UNRWA, Sestak said, "I want to have this to be a negotiation to where we can restore it, but with the understanding that the Palestinian Authority will be adhering to the right usage of the funds. They will not go into support[ing]" terrorists and their families, commonly known as "pay to slay."

"That won't mean we go Day One and just do it, but do I believe we need to eventually do that," he rhetorically asked, answering, "I do."

"I also believe on this one that it has to be a response from them that mischievous and maleficence and all that has to end," he added.

'I abhor prejudice. I abhor hatred. I abhor injustice'

Surrounding UNESCO and the U.N. Human Rights Council, Sestak said that the United States would re-enter those groups to "fix that bias that is evident within it" against Israel, saying that those moves exemplified the United States of retreating "from the world," and that instead America should "re-engage across the board these activities, but I also say restructuring appropriately from the [World Trade Organization] to UNESCO."

"America broke its word. We must keep our word."

"I do want to get back in there because there are many good things outside of" their bias against the Jewish state.

Regarding the PLO mission, Sestak said that he is "not opposed" to reopening it.

"Again, I believe you should always engage," he said. "If the Soviet Union could have an embassy in America, there's no reason why we should not have the PLO mission there to engage."

Sestak cautioned that reopening the PLO mission would not be recognition, as "we need to make sure that we have entities that we can speak with," though "we should not be the decider on a two-state solution."

The Democratic candidate did not say if he would undo Trump's recognition in March of Israeli sovereignty over the Golan Heights.

"I don't think that was the right thing to say. That the United States unilaterally should say that Israel has sovereignty over the Golan Heights," said Sestak. "This needs to be part of the process toward a two-state solution. The status quo was where it was. They obviously do have control of it for we need to resolve that" through the two state-solution.

Sestak is from a state where the worst attack in American Jewish history occurred almost nine months ago at the Tree of Life*Or L'Simcha Synagogue in Pittsburgh, where 11 people were shot and killed during Shabbat-morning services on Oct. 27, 2018

"I abhor such prejudice. I abhor such hatred. I abhor injustice," said the candidate, who has carried a book of midrashim, which consists of ancient commentaries about the Hebrew scriptures attached to the biblical text. The earliest midrashim were from the second century, though much of their content is older.