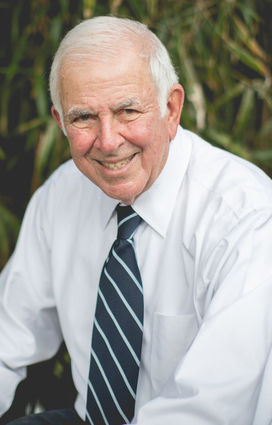 Do you remember the “most interesting man in the world” beer commercials? The creators of that ad got it all wrong because the most interesting man, at least in Central Florida, is Dick Weiner, the recipient of this year’s Heritage Human Service Award.

A stately man, Weiner is unhurried, with a dignified appearance. In his humble opinion, he doesn’t think he deserves this award. “I’ve done so little over the last few years,” he told Heritage, then he rattled off names of others he thought were more worthy.

He has been very active, however, much behind the scenes—in the past, chairing the local Combined Jewish Appeal Campaign in 1976, president of the Central Florida Jewish Community Council (now the Jewish Federation) from 1974 to 1975, a longtime Pacesetter to the Federation campaign, and president of TOP (the Tampa, Orlando, Pinellas Jewish Foundation); presently he is still a strong supporter of Jewish Family Services Orlando, Hillel, Jewish Academy of Orlando, The Roth Family JCC, Holocaust Memorial Resource and Education Center, Kinneret, AIPAC, Jewish National Fund, and a sponsor of the Kehillah Exhibit.

“Dick remains an engaged and concerned member of the Jewish community and deserves to be recognized for his past and current participation in making our community a better place for all to live,” said Roz Fuchs, who nominated Weiner for this award.

He is a man who dearly loves the Jewish community. Jewish Family Services is especially close to his heart. “JFS is one of the best kept secrets in the community,” he stated. “To me that’s the essence of Judaism—tikkun olam to the whole community.”

Weiner was born in 1935 in Altoona, Pa. He was named Richard Alan Weiner. By the time he was six months old, his father had passed away and his name was legally changed to Irving Richard Weiner in remembrance of his father. His mother and he moved to Patterson, N.J., and shortly thereafter moved to Orlando with his grandparents.

Weiner was in the first graduating class of Boone High School. He shared that many people believed there were only two high schools in Orlando: Boone and Edgewater. However, he said there was Jones High School. Which brought up the topic of prejudice. He shared a conversation he had with a woman recently at the University Club in Winter Park (where Jews were once banned). “We got to talking about prejudices,” he set the scene and asked her where she went to high school. She said she went to Edgewater. Setting the bait, he asked her, “How many high schools did we have then?”

“Two high schools,” she responded. “We never had just two high schools,” he replied in his logical, calm manner. “There was Jones.” Weiner then explained that back then it was a mindset—not good or bad. “You didn’t even count the black schools.”

Today, Weiner will point out this flawed mindset, bringing attention to what the black community quietly endured at that time. “It wasn’t prejudice. We were programmed—didn’t even recognize it.” In a parallel world, the Jewish people also quietly accepted the anti-Semitism of the 1920s-30s. “We couldn’t belong to clubs. We didn’t think of it as any big deal—just a part of life.”

Good friend Harvey Kobrin, who has known Weiner for 52 years, calls him a “straight-shooter,” meaning he calls it as he sees it.

“He is the least judgmental,” said Ben. “He looks for the good in everybody and can communicate with everybody.”

As evident of Ben’s comment, Weiner is a member of the “Einstein Institute.” It isn’t an intellectual club, as one might think. Laughing, Weiner said it’s a name he came up with for his group of tennis friends who go to Einstein’s Bagels after playing their matches. “We sit and talk about all sorts of things,” he said. What’s interesting is that most of the Einstein group are of a different political persuasion than Weiner, but these are his buddies and have been for a long time.

After high school he attended the University of Florida where he met his “current” wife (that is what he still calls her after all these years), Louise Jacobson of Sanford.

“We met my senior year and were pinned, engaged and married in four months,” he said.

They have three sons: David, who is a physician at Shands; Alan, a financial corporate adviser in Tampa; and Ben, who worked with his father in finance for 25 years. They also have six grandchildren.

Weiner served active duty and in the reserves as a second lieutenant in the U.S. Infantry from 1957 to 1964. “Let’s be clear though,” he said unabashedly, “I got commissioned through the ROTC program as a second lieutenant for six months active duty. Then eight years active reserves, which meant that every summer I had a Federally-paid summer vacation at one of the Army bases.”

During and after his service, he was a financial adviser with Shearson Smith Barney for 47 years.

A close friend, who also hails from Patterson, is Stan Roberts. They’ve known each other since before high school and met in Congregation Ohev Shalom’s Hebrew School.

“Dick is always there, concerned. He is extremely informed and well-read on issues concerning Israel, Judaism and the U.S.,” Roberts said. “Dick was a fighter for Jewish causes long before AIPAC, Israel Bonds. He was probably one of the first people who sold bonds for Israel.”

Weiner has the ability to spur others into action simply through his own involvement in the community. Roberts noted that seeing Weiner’s involvement in JFS Orlando as a major contributor and serving on the Federation board, spurred him into action to give back to the community. Jim Shapiro, also a longtime friend, feels the same way. “We would follow each other—he’d get me involved and I’d get him involved.”

Son Ben stated that his dad is a great role model. “His legacy to the family is one of giving back to the community,” Ben shared.

Fuchs agrees, stating “...ever since moving back to Orlando as an adult in 1985, I have been so impressed with Dick’s love of our community, his concern for community... Dick’s big heart and charming smile just win people over and you can just feel the pleasure he gets from doing things that help others.”

In addition to his support for the Jewish community, Weiner also is a generous supporter of United Arts, Dr. Phillips Center for the Performing Arts, the Winter Park Sidewalk Art Festival, Winter Park Library and United Against Poverty.

Weiner remembers the Orlando Jewish community as being close knit. His mother and stepfather, Birdie and Al Damius, were founders of Congregation of Liberal Judaism. He was a member of both synagogues—now only Ohev, where he was bar mitzvahed by Rabbi Morris Skop. What is very interesting is that he is also a member of the Jewish Humanistic Society. He strongly believes in Jewish tradition and ethical teachings—Torah, morals and the laws. But he does not believe in a supreme being.

Regardless of his beliefs, Weiner has a good relationship with Rabbi David Kay and Rabbi Aaron Rubinger. Once Rabbi Kay called him to say that a philosophical discussion they had inspired him to structure his sermon around that topic. The rabbi invited Weiner to come to services, which he and Louise accepted.

Not often in attendance at services, Weiner shared, with a twinkle in his eye, that Rabbi Rubinger immediately saw him, came over and asked “Dick, is everything ok?” Then someone else welcomed him and Louise, asking “Are you new to the community?” To which he graciously responded, “Well, no, not exactly. I was bar mitzvahed here.”

Weiner is fiercely proud of his Jewish identity. Asked what he would like to see changed in the community, his response was that he’d like to see a deeper respect for the High Holy Days.

As a child, Weiner remembers fullpage ads in the Sentinel the day before the High Holy Days listing all the Jewish merchants in town whose businesses would be closed on these days.

“It would be better for the community to work toward respecting our own holiday and religion to a greater degree,” he shared.

How does this tie in to being a secular Jew?

“My thing is, you can be a complete atheist and you still respect your religion and your history. You respect it for the broadness of it, for other people.”

For Weiner, the essence of being Jewish is helping others, and to believe in the broad sense of the total community. “Ultimately,” he shared, “Jews need to take care of other Jews and be there to support them.”

Jeff Gaeser, publisher of the Heritage Florida Jewish News, will present the award to Weiner at the Jewish Federation annual meeting, Sunday, Aug. 25, at 10 a.m.