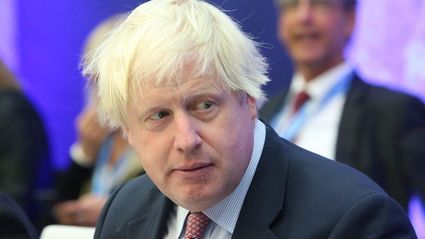 (JNS) Boris Johnson overwhelmingly was elected by his Conservative Party on Tuesday to become the next party leader and prime minister of the United Kingdom.

In his victory speech, Johnson, who defeated Foreign Secretary Jeremy Hunt in the party race, promised that he would "deliver Brexit, unite the country and defeat Jeremy Corbyn."

Johnson, 55, who succeeded Theresa May, comes to power amid several crises wracking his country. He has to deal with a do-or-die Oct. 31 deadline to leave the European Union, known as "Brexit," and the potential economic and political ramifications to arise from that. At the same time, he will need to push back against Iranian aggression, especially in the aftermath of the regime seizing two U.K.-owned oil tankers, as well as handle growing anti-Semitism in the country, especially within the rival Labour Party.

Earlier this month, Johnson warned Iran to "cease this madness" over violating the 2015 Iran nuclear deal, adding that he's "prepared" to reimpose sanctions on the regime.

"We wish Boris Johnson every success as Prime Minister at this critical time for our country. We have had a long and positive relationship with Mr. Johnson as both mayor of London and foreign secretary and we look forward to this continuing as he enters Downing Street," said the Board of Deputies of British Jews in a statement.

The Liberal Judaism initiative in the United Kingdom tweeted that it "looks forward to working with @BorisJohnson, the new Prime Minister, as we have with Prime Ministers over the last decade."

Liberal Judaism looks forward to working with @BorisJohnson, the new Prime Minister, as we have with Prime Ministers over the last decade.

"Best wishes to Boris Johnson, a true friend of Israel. I trust you will continue working to make the Jewish community feel safe in the U.K. during these challenging times. I look forward to your ongoing commitment to fostering ties between the U.K. and Israel."

Israel's President Reuven Rivlin said that he expects bilateral relations to strengthen under his leadership.

"I am confident that under your leadership the excellent bilateral relations between our two countries will go from strength to strength. I hope to see you back here in ‪#Israel soon."

Congratulations to @BorisJohnson, who will become UK Prime Minister tomorrow. I am confident that under your leadership the excellent bilateral relations between our two countries will go from strength to strength. I hope to see you back here in #Israel soon @10DowningStreet

In an interview earlier this month, Johnson promised to maintain the European Union designations of terrorist groups were the United Kingdom to leave the continental body and deal with Palestinian leaders regarding their policy of financially rewarding terrorists.