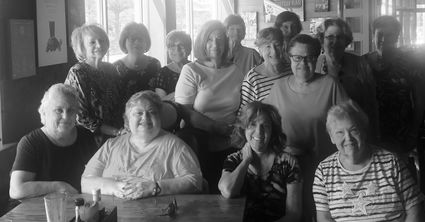 Back in 1959, Stephen Tyng Mather High School was built in the West Rogers Park neighborhood of Chicago, Ill. The student population, at that time, was 95 percent Jewish.

Some of the Mather alumni women would get together for a luncheon reunion three or four times a year. This year, they had a surprise guest—Risa Posner Dombrosky, wife of Gil Dombrosky, a Heritage employee.

Risa was amazed to see friends and classmates she hasn’t seen since graduation. The three-hour lunch was filled with so much chatter about where everyone’s life has taken them, yet it still wasn’t enough time to hear all the stories.

Afterwards, Risa and Gil were taken by their friends Linda Stein Dubin and Marty Boroff (both Matherites) for a tour of old neighborhoods where Risa grew up and where she and Gil started their married lives together.