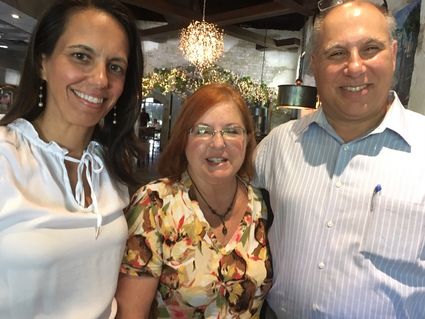 "Getting old is not for Sissies"...

Despite what you may have seen on the streets, the following combinations DO NOT go together:

A nose ring and bifocals.

A pierced tongue and dentures.

A belly button ring and a gail bladder surgery scar.

Midriff shirts and a midriff bulge.

In-line skates and a walker.

(But otherwise YOU'RE LOOKIN GOOD!!)

This is directly from the World Jewish Congress digest:

"Following years of appeals from WJC and other organizations demanding an aggressive policy against hateful content online, Facebook has taken an unrivaled move to ban white nationalist and white separatist posts from its platform.

The WJC and its affiliated communities in more than 100 countries are directly and dangerously affected by the proliferation of hate speech and incitement to violence online, and we have long advocated to Facebook and other social media companies to recognize that retrospective flagging and consideration of individual posts, on isolated bases, cannot suffice in a world that thrives on digital presence and influence. The former was said by WJC Vice President ROBERT SINGER. He continues: 'We are deeply grateful to Facebook for taking the lead in trying to rip this cancerous spread of offensive material in the bud and hope that this policy will be implemented swiftly and effectively. It is no easy task to flag and remove the hundreds of thousands of anti-Semitic, racist, xenophobic, and discriminatory posts uploaded each year, and we know that the mission ahead in identifying the groups and individuals behind this material is enormous. That said, it is absolutely necessary. There can be no gray area when it comes to hateful material online. Hate speech must be removed, period. We are confident that Facebook will continue to embrace its moral corporate responsibility carefully and diligently, to ensure that this policy is extended to all existing and potential offenders, including blatant Holocaust deniers and obfuscators in all languages, as well as neo-Nazi groups.' Singer also expressed appreciation for Facebook's support and involvement in WJC's ;#WeRemember campaign to raise awareness about the Holocaust, and its ongoing efforts to actively engage young people to learn about the horrors of hatred.

Look who I met at a top Central Florida Italian Restaurant the other day. (They now are witnesses to my over-eating!) My very own Heritage News Editor, CHRISTINE DESOUZA, ALAN RUSONIK, head of school at the Jewish Academy and RACHEL KROPP, marketing director of the Jewish Academy.

Actually, Christine tells me I look great... but I am over-eating. You can tell by my increasing size. But the others were clueless.

(And all were very pleasant and pleased to bump into me and my friend.)

And speaking of eating...

At the recent Dazzling Divas show, I was seated next to a lovely lady with the same name!

GLORIA GOLDBERG. She is also a widow, having been married to PAUL for many years until his death 2 1/2 years ago. She described him as the love of her life. They are the parents of 3 children and grandparents of 9.

Gloria was there to enjoy the Dazzling Diva show as was I, and indeed we did! (Thank you Kenny, for always coming thru.)

We also enjoyed the dinner (take all you want) that was available. (Yum).

This interesting and sweet gal, has many interests, among them cruising, dining out and visiting Las Vegas. (Boy, do we have stuff in common, much more than our name!)

Gloria would love to meet a companion who shared her interests. (Who wouldn't?)

On Aug. 11th, beginning at 2 p.m. in the Maitland JCC Senior Lounge, the movie "If Beale Street Could Talk" based on the James Baldwin novel, will be presented.

On Aug. 12th at 1 p.m. in the Maitland JCC Senior Lounge, The Happiness Project 39ers Edition will be presented.

Come learn about a project where seniors have the opportunity to spread kindness and happiness all around! It will be led by Cultural Arts Director JENNIFER COHEN.

NO! I'M NOT IN A RESTAURANT!

Rather, I'm in the Fed-Ex office on Aloma Avenue in Winter Park.

Two wonderful and pleasant employees of Fed-Ex were there the morning I came in to have cards printed.

JULIE and TERRELL are their names. They made what I thought was going to be a tough morning, so very easy and fun! 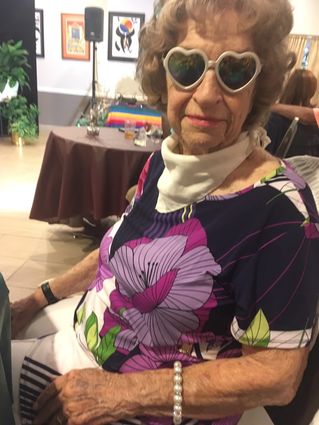 They knew just what I wanted (even though I didn't) and helped me completely. Thank you, Julie and Terrell! Thank you! Thank you!

Yitzhak returns from a 4-week business trip to New York and finds out that his wife Sadie has been unfaithful during his time away.

"So was it Abe, that degenerate old man?"

"No, it certainly wasn't him."

"Then it must have been that simpleton Moshe."

"No, it wasn't Moshe either," replies Sadie.

Yitzhak is now very angry and his blood pressure is sky high. "What's the matter?" he cries out, "are none of my friends good enough for you?"