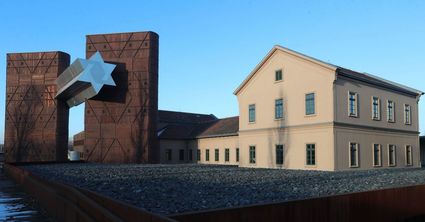 The House of Fates Holocaust museum, housed in a former railway station that deported Jews to concentration camps, seen in Budapest, Jan. 21, 2019. It has not opened to the public despite having been finished five years ago.

(JTA)-In the capital of Lithuania, an institution formerly known as the Museum of Genocide Victims barely mentions the murder of nearly all the country's Jews by Nazis and locals, focusing instead on the years of abusive Soviet rule.

In Kaunas, Lithuania's second-largest city, another so-called museum hosts festivals and summer camps on the grounds of a former concentration camp for Jews known as the Seventh Fort, where the victims are not commemorated.

In the Ukrainian city of Dnipro, a Holocaust museum called "Tkuma" features a controversial exhibition on Jews complicit in Soviet policies that led to a mass famine, known as the Holodomor, a whole decade before the Nazis began implementing their "final solution."

And in the capitals of Romania and Ukraine, where Nazis and collaborators organized the murder of more 1.5 million Jews, there are no national Holocaust museums at all. Infighting and debates about history and complicity have prevented their opening.

These are just a few examples of a broader trend in Eastern Europe where institutions whose stated goal is to educate the public about the Holocaust end up trivializing, inverting or ignoring it altogether. Commemoration activists from the region blame a varying mix of factors, including nationalist revisionism, anti-Semitism, a lack of funds, personal animosities and incompetence.

All these elements are on display today in the ongoing sagas of the National Museum of Jewish History and Holocaust in Romania, which does not yet exist, and the House of Fates museum in Budapest, Hungary, which exists but remains closed five years after its scheduled opening.

In Bucharest, disagreements over what began as a generous municipal plan in 2016 to finally establish a Holocaust museum this year deteriorated. The city's Deputy Mayor Aurelian Badulescu threatened to unveil in Bucharest a bust of Ion Antonescu, the war-time leader who collaborated with Hitler. His threat was seen as a measure to spite local Jews.

The municipality, which designated for the project a magnificent building that was formerly a bank in the city center, failed to get the proposal approved. Opponents of the plan wanted the museum moved to the city's outskirts. After protests by two groups-the government institution charged with running the museum, the Elie Wiesel National Institute for Studying the Holocaust in Romania, and the MCA Romania watchdog on anti-Semitism-Badulescu announced his plan to honor Antonescu.

Badulescu also wrote to Maximilian Marco Katz, a Romanian Jewish citizen who was born in Bucharest and who heads MCA, a letter telling him to "go back where you came from." The Bucharest museum's future is currently uncertain.

Meanwhile in Budapest, the House of Fates museum, located at a former train station where Hungarian Jews were shipped off to be killed, has been standing empty for about five years because of a dispute between the Mazsihisz federation of Jewish communities and the government. It involves the government's appointment of Maria Schmidt, a historian accused of minimizing the Holocaust by equating it to Soviet domination, to head the museum.

To break the stalemate, the government this year tasked EMIH, a Chabad-affiliated group, to head the museum. EMIH has said Schmidt is out. The Jewish infighting has further stalled the project, in a country where critics say a right-wing government seeks to whitewash Holocaust-era collaboration.

An acclaimed Holocaust museum, the Holocaust Memorial Center, opened in 2004 on Budapest's Pava Street with government funding. But it has suffered from internal fights, cutbacks and a decline in visitors that have raised doubts about its longterm viability, historian Ferencz Laczo noted in a 2016 essay.

Inter-communal rivalries have also featured in the seemingly interminable effort to build a Holocaust museum in Kiev, Ukraine. It began in 2001 and is ongoing.

But alleged attempts to whitewash Holocaust-era complicity in Nazi-occupied territories is at the heart of much of the dysfunctionality surrounding Holocaust commemoration in Eastern Europe, according to Dovid Katz, the American-born, Vilna-based Yiddish scholar who in 2016 published a comprehensive essay on the subject.

Katz writes of a "drive to equalize Nazi and Soviet crimes [that's] part of a larger effort to cleanse 'the lands between' (in Eastern Europe) of their historical record of wartime collaboration."

In museums in Eastern Europe, some of that effort takes place through omission. A municipal museum in Ukmerge near Vilnius, for example, relays accurately the slaying of thousands of Jews there without once stating who killed them (it was local collaborators).

A more sophisticated technique is what Katz calls "double genocide"-the lumping togethers of the Holocaust and Soviet occupation, often with the latter eclipsing the former, as in Vilnius' genocide museum.

In 2011, the museum directors added a small plaque to its cellar referencing the killing of Jews following years of complaints that their fate was ignored. Still, the museum is almost entirely devoted to Soviet rule and to defending the position of Lithuania as the only country in the world that formally considers the country's domination by the Soviet Union as a form of genocide.

(The museum changed its name to the "Museum of Occupations and Freedom Fighters" last year amid pressure on this point, but its website still contains the word "genocide.)

The logic behind the "double genocide" effort is rooted in the popular perception across Eastern Europe and beyond that Jews were responsible for hostilities directed against them during the Holocaust. According to this theory, writes Katz, Jews are blamed for allegedly spearheading communist atrocities in Eastern Europe before the Nazis took control from the Soviet Union.

Zsolt Bayer, a co-founder of Hungary's ruling Fidesz party, provided a salient demonstration of this in a 2016 op-ed in which he used the role of Jews in communism to justify the Holocaust.

"Why are we surprised that the simple peasant whose determinant experience was that the Jews broke into his village, beat his priest to death, threatened to convert his church into a movie theater-why do we find it shocking that twenty years later he watched without pity as the gendarmes dragged the Jews away from his village?" Bayer wrote.

Collaboration between locals and the Nazis occurred on a massive scale in Western Europe as well. But that part of the continent was liberated after World War II, beginning a long and ongoing process of reckoning in France, the Netherlands, Belgium and other Western countries.

Eastern Europe, meanwhile, was taken over by a brutal and anti-Semitic regime that, for its own interests, would only allow Holocaust victims to be commemorated as "Soviet citizens," Felicia Waldman, an expert in Jewish studies and Holocaust education at the University of Bucharest, noted in an interview with the Jewish Telegraphic Agency.

Because of this, "it's only in the past 20 years that you have local scholars in Eastern Europe who have become experts on the Holocaust," she said. Beyond that, "the legacy of the Communist regime makes it hard for some people to admit what happened, because they understand their own nation's role as a victim, not a perpetrator." And it's of course "an issue of national pride" to deny Holocaust-era complicity.

Indeed, throughout much of Eastern Europe, and especially in Ukraine and Lithuania, collaborators who were responsible for killing Jews while fighting alongside the Nazis are celebrated as national heroes because they fought against the Soviet Union.

One way of sweetening the bitter pill of complicity has been to elevate in museums the role of Holocaust-era rescuers.

In recent years, a number of museums for rescuers opened in countries where a significant part of the population collaborated with the Nazis, including the Janis Lipke Museum in Riga, Latvia, which opened in 2012. In Lithuania, where thousands of Jews were murdered by locals, the museum at the Ponar killing site near Vilnius features, curiously, a display about the Japanese diplomat Chiune Sugihara, who worked in Kaunas and saved mostly Polish Jews. 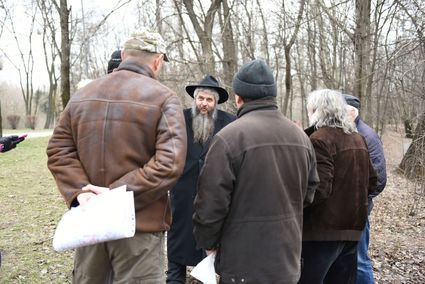 Moshe Azman, a Ukrainian rabbi, discussing with architecht the construction of a Holocaust museum near the Babi Yar monument in Kiev, Ukraine on March 14, 2016.

In March, Lithuania's Vilna Gaon State Jewish Museum began a mobile exhibition about the country's Righteous among the Nations – non-Jews who have been recognized by Israel as having risked their lives to save Jews.

In 2016, Poland, amid a polarizing international debate about Polish Holocaust complicity, opened a museum about its rescuers. Another such museum is planned for Auschwitz. Polish officials have claimed that there have been about 70,000 Righteous in Poland, although Israel's Yad Vashem Holocaust museum has recognized fewer than 7,000.

With rescuers who have been recognized by Yad Vashem, their elevation in Eastern European museums is "in itself a worthy cause," Efraim Zuroff, the Eastern Europe director of the Simon Wiesenthal Center, told JTA. "But not when it comes instead of the recognition of local complicity in Nazi crimes, that is so sorely missing in the post-communist countries today."