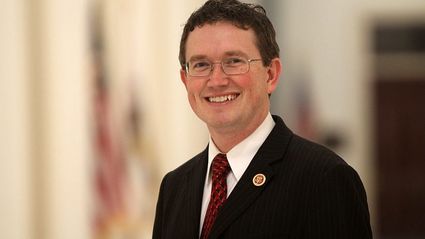 (JNS)-Kentucky Rep. Thomas Massie, a libertarian, was the only member of the Republican Party to vote against last week's resolution in the U.S. House of Representatives condemning the anti-Israel BDS movement.

Massie, 48, explained his decision in a statement:

I voted against H. Res. 246 because it calls for the full implementation of a bill I voted against back in 2014. That 2014 bill spends taxpayer dollars on "green" energy subsidies for another country, despite the fact that we face a debt crisis of over $22 trillion in the U.S.

In addition, H. Res. 246 calls for Israel to implement a so-called "two-state solution." Rather than dictate to Israel what the U.S. believes is best for Israel, Congress should instead refrain from interfering with Israel's own decisions regarding its foreign and domestic policy.

I also do not support federal efforts to condemn any type of private boycott, regardless of whether or not a boycott is based upon bad motives. These are matters that Congress should properly leave to the States and to the people to decide.

Doug Bandow, a senior fellow at the Cato Institute, a libertarian think tank in Washington, D.C., told JNS that Massie's "second argument proffers what he appears to view as a pro-Israel reason."

"The third argument strikes me as a more libertarian argument, which merely suggests that as a matter of principle the federal government shouldn't target private citizens for taking private, nonviolent action against a foreign government," he continued. "If he applies the principle generally, I don't think it is fair to call it anti-Israel."

"Someone similarly could oppose all foreign aid as a matter of principle, which obviously would affect Israel along with other nations so long as it is applied consistently," added Bandow. "I don't have any reason to assume that Massie is being disingenuous, but I haven't followed his voting record in any detail."

"The bottom line is that Rep. Massie chose not to stand with his Republican colleagues and the American people to speak out, in one voice, against BDS," said Republican Jewish Coalition spokesperson Neil Strauss. "This resolution did not appropriate a single taxpayer dollar; it didn't infringe on a single citizen's civil rights."

"The intent of this resolution was to reject discriminatory anti-Israel boycotts and to reaffirm the strong U.S.-Israel relationship," said B'nai B'rith International CEO Dan Mariaschin. "Given the overwhelming number of Republicans and Democrats who co-sponsored the resolution, it seems Congressman Massie's views on this legislation are outside the mainstream."

The Zionist Organization of America, on the other hand, supported Massie's vote.

"We agree that Congress should never support any resolution, as this resolution does, which calls for a Palestinian Arab State, which would surely be an Iran/Hamas terrorist state just as Gaza immediately became," ZOA president Mort Klein told JNS. "The issue of Palestinian Arab Statehood is irrelevant and extraneous to the horrific BDS issue, and AIPAC should never have supported inserting this into the BDS resolution, especially when the language claims a state is the only way to peace."

Massie, added Klein, "was against the resolution supporting a Palestinian Arab State" that "is more dangerous to Israel than BDS."

Massie spokesperson Laura Lington told JNS that "a few rabbis from the district have reached out to our office and agree with the congressman's opposition to the two-state solution language in the resolution."