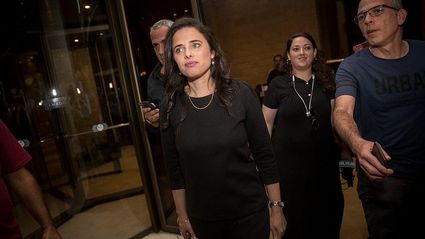 New Right Party chair Ayelet Shaked arrives at the Ramada Hotel in Jerusalem for a meeting with Jewish Home Party chair Rafi Peretz after announcing their union in Jerusalem ahead of the September elections, July 28, 2019.

(JNS)-Israel's politics got another major shakeup in recent days-this time on the right, with the announcement of the merger between Ayelet Shaked's New Right Party and Jewish Home. Like similar moves on the left last week, the latest union seeks to boost the election fortunes of the smaller parties on the right in order to cross the electoral threshold and have a stronger hand in coalition negotiations as the September elections approach.

"From the beginning, I have said that the person who leads this bloc must be the one who brings the most votes, regardless of their background, and all of the polls have shown that I will bring the list the most votes," Ayelet Shaked, former justice minister and new head of the United Right, told JNS.

Shaked, who took over last week as the chairperson of the New Right Party from political partner Naftali Bennett, gained the position on top of the right-wing union after former Israel Defense Forces' Chief Rabbi and current Education Minister Rafi Peretz, leader of the Jewish Home Party, stepped aside.

The merger will likely ensure that the two larger parties to the right of the Likud cross the threshold and enter the Knesset. New Right fell 1,400 votes short of entering the Knesset after the April elections, effectively causing three mandates to be lost.

Jeremy Saltan, director of English Operations for New Right, tells JNS that "Shaked in the No. 1 slot brings a new energy that is already resonating with voters."

"We will make the most of unity efforts until the last minute."

The deal between New Right and Jewish Home did not come easy. New Right was demanding four spots in the top nine slots on the list-more than Jewish Home wanted to give them. Jewish Home demanded that Shaked and Bennet commit to declaring Netanyahu their candidate for prime minister. New Right was reluctant to do, in case Netanyahu cannot form a government after the elections and they want to suggest someone else for the job. In the end, both sides gave in to the demands of the other, and they signed the deal.

Nevertheless, Shaked and former New Right chairman Naftali Bennet have emphasized that this is a "technical bloc" to make sure that no right-wing votes are wasted; it doesn't mean that all members of this new list have to agree on the issues.

Saltan told JNS that the "technical bloc" means that "the party will break off after the elections and act as an individual faction in the next Knesset that promotes the values of the New Right."

In the party announcement, Shaked also said that she would reach out to the far-right Otzma Yehudit and libertarian-learning right-wing Zehut parties to join the coalition. "We all need to be in one big party," she said. "We will make the most of unity efforts until the last minute."

The news of the right-wing merger also caps off a remarkable political comeback for Shaked, who grew up secular in Tel Aviv and worked in the high-tech world prior joining public service in 2006, eventually rising through the political ranks under Netanyahu to join Bennett in the Jewish Home Party in 2012.

After the 2015 election, Shaked gained the powerful justice minister portfolio. She held that position for four years, implementing her right-wing ideology, including the appointment of conservative judges to the bench, and creating a legal structure for settlements in Judea and Samaria. She also commandeered legislation requiring transparency from NGOs receiving a majority of their budget from "foreign entities."

Prior to the April 9 elections, Shaked and Bennett broke off from Jewish Home and formed the New Right. However, the new political alliance yielded poor results, not even crossing the election threshold.

'It's not too late to fix this dangerous mistake'

While the new merger potentially boosts Shaked's chances of re-entering the Knesset, it also rehashes old divisions within Jewish Home that led to Bennett and Shaked splitting off in the first place.

The Jewish Home is considerably more conservative on religion and state issues than New Right, and many question how someone secular like Shaked can lead a list with members who disagree with her about the numerous religious issues involved in running a Jewish state.

Shaked dismissed such criticism, saying that the new party can be a home for a wide range of views.

"Just like the Republican Party in the United States has a wide range from the party's mainstream to the Tea Party, we can also create a large list that will include right-wing secular, modern religious and the ultra-religious," Shaked told JNS.

Political commentator Yaakov Bardugo said the merger can go one of two ways.

"We will make the most of unity efforts until the last minute."

On the one hand, it has potential to reach double digits with the five seats that Jewish Home won last election, the nearly four won by New Right, coupled with remnants of Kulanu, which joined with Likud, and perhaps some seats from Moshe Feiglin's Zehut Party, which did not pass the threshold and has not joined with any other parties. On the other hand, secular voters who supported Shaked and Bennett but are unhappy with the merger with more extreme religious parties may go to Likud or Avigdor Lieberman's party, Yisrael Beiteinu, which has come out strongly against the religious extreme.

The Likud has reacted negatively to the new merger, releasing an official statement that the parties must work to include additional fringe right-wing parties or else this merger will be for nothing.

"If this is the end of the merging process on the right while all the Arab parties have united, the right-wing bloc will be at risk. Bennett, Shaked and Smotrich intentionally left out five to six mandates on the right-and they are knowingly jeopardizing the continuation of a right-wing government. It's not too late to fix this dangerous mistake," the Likud statement read.

Regardless, the current merger has breathed new life into the right-wing on the political map. And Shaked, as the leader of this list, has the potential to either draw in more voters or push supporters away.

One way or another, this development has the potential to be a game-changer come Sept. 17.