Netanyahu offers condolences after mass shootings in Texas and Ohio 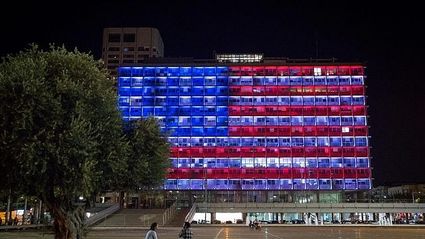 Tel Aviv City Hall seen lit up in the colors of an American flag in solidarity with the victims and injured following two back-to-back shootings in El Paso, Texas, and in Dayton, Ohio, Aug. 4, 2019, similar to this one marking the Jewish worshippers shot and killed in Pittsburgh on Oct. 27, 2018.

(JNS)-Israeli Prime Minister Benjamin Netanyahu conveyed his condolences to the American people on Sunday night after back-to-back mass shootings rocked the cities of El Paso, Texas, and Dayton, Ohio, over the weekend.

"In the past 24 hours, we have witnessed two murderous attacks in Texas and Ohio," he wrote on Twitter. "On behalf of all government ministers and all citizens of Israel, I send condolences to the bereaved families, best wishes for recovery to the injured, and solidarity with the American people."

Patrick Crusius, 21, has been charged with opening fire in a crowded Walmart in the Texas border town of El Paso on Saturday, killing 20 people (two more people died of their injuries on Monday, making the total 22) and wounding dozens more. Crusius published a manifesto prior to the attack decrying the "Hispanic invasion of Texas."

The El Paso attack was followed just hours later by a mass shooting outside a Dayton bar. Police identified the shooter as 24-year-old Connor Betts. Nine people were killed and 26 wounded in that attack before the shooter was killed by police. The motive for the attack is still unclear.

The two incidents were preceded by a mass shooting on July 28 at Northern California's Gilroy Garlic Festival, where 19-year-old Santino William Legan killed three people, including two children. Legan's home was found to contain literature on white supremacy as well as Islamic extremism.

The Dayton killing marked the 251st mass shooting in America since the beginning of 2019.

In addition to Netanyahu's remarks, Israel's Foreign Ministry tweeted an image of "Tel Aviv's City Hall building lit up with the colors of the U.S. flag in solidarity with the mourning of the American people following the deadly shootings in #Ohio & #Texas."