Abbas 'aggressive' in talks with Democrats, rejected overtures to working with US on peace plan 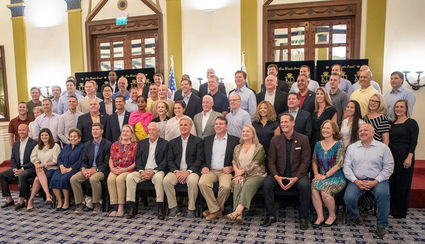 Democratic and Republican members of Congress in Jerusalem during an overlap of their trips to Israel and the Palestinian territories, sponsored by AIEF-AIPAC, August 2019.

(JNS)-Palestinian Authority leader Mahmoud Abbas avoided answering whether or not he believes that Israel has a right to exist as a Jewish state and seemed "aggressive" in talks with U.S. lawmakers regarding the Trump administration's policies, according to members of Congress who just returned from a visit to Israel and the Palestinian Authority-controlled areas of the West Bank.

Rep. Susan Wild (D-Pa.), told JNS that she "didn't walk away from the meeting with Abbas feeling particularly optimistic about an openness" to working with the White House and legislators in support of a two-state solution.

"I don't know that I think that Abbas recognizes that there is, or should be, a Jewish state-that was my impression," she said. "I think somebody asked him that question point-blank, but I don't remember the exact answer. But I know that we all walked away with a sense that he wasn't really interested in working with the Trump administration."

Relations between the Trump administration and Palestinian Authority have been largely non-existent since late 2017, when U.S. President Donald Trump broke with long-standing American policy and recognized Jerusalem as Israel's capital and announced that the U.S. embassy was moving from Tel Aviv to Jerusalem, a decision that infuriated Palestinian leadership. Since then, the P.A. has officially boycotted the Trump administration and its efforts to restart the Mideast peace process. In turn, Trump has cut foreign aid to the P.A. as a result of its "pay to slay" policy that funds terrorists and their families, as well as the Palestinian refugee agency long spearheaded by the United Nations, UNRWA.

During the Abbas meeting with U.S. congressional members last week, the parties also discussed Rep. Ted Deutch's (D-Fla.) bill H.R.1837 that in part works to restore U.S. funding to humanitarian projects benefiting Palestinians and joint Israeli-Palestinian security cooperation. This type of funding was rejected by the P.A. in February with implementation of the Anti-Terrorism Clarification Act. Continuing to receive funding, the P.A. interpreted, would have opened them up to U.S. courts in lawsuits brought by families of victims of terrorism.

Wild said Abbas appeared belligerent during discussions about Deutch's bill, which passed the House in July.

"Abbas was fairly aggressive is all I can say. I would not go so far as to say that he expressed gratitude for it, let's put it that way," said the Pennsylvania legislator. "His response was something on the order of, you know, we [the United States] have given back what we had already taken away, or something like that."

Wild was one of 72 members of the House of Representatives-both Democrats and Republican-who traveled to Israel with the American-Israel Education Foundation (AIEF), the nonprofit arm of the American Israel Public Affairs Committee (AIPAC).

The AIEF-AIPAC delegation brought one of the largest groups of Democratic freshman members, at least 32 of 64 new members, to Israel and the Palestinian territories. For many, it was their first time in the Jewish state and/or the Middle East.

The two parties traveled separately, but met up for a few days last week-namely, on Sunday for a meeting with Israeli Prime Minister Benjamin Netanyahu, President Reuven Rivlin and other Israeli politicians. One of the topics discussed included how the U.S. House of Representatives recently passed a resolution opposing the BDS movement against Israel.

Another subject at issue is support for a two-state solution to the Israeli-Palestinian conflict.

On Aug. 12, a group of 21 right-wing members of the Knesset wrote an open letter to the U.S. Congress saying that they consider the establishment of a Palestinian state to be "far more dangerous" than BDS.

Democratic Reps. Karen Bass (D-Calif.), Alan Lowenthal (D-Calif.) and Gerry Connolly (D-Va.), among others, aim to introduce a resolution affirming Congress's support for a two-state solution to the floor for a vote after the summer recess.

Wild, who had visited the country in 2008 on a trip with her local Jewish Federation, said this trip was completely different, and that she saw the effects the experience had on her colleagues, many who seemed to gain a new appreciation for the U.S.-Israel relationship.

Said Wild: "To travel with freshman members-really smart, engaged, people who had never been to Israel, and other than what they might have read in the news on a regular basis didn't really have a whole lot of understanding of Israel-and watching their evolution throughout the week and their level of understanding, watching it grow, was really just tremendous."