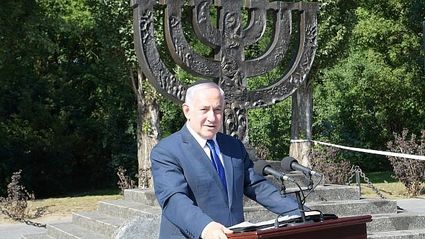 Israeli Prime Minister Benjamin Netanyahu delivers a speech on Aug. 19, 2019 at a ceremony in memory of Ukrainian Jews who were murdered at Babi Yar during World War II.

The two leaders laid wreaths at the menorah monument of the site, where an estimated 33,771 Jews were massacred in September 1941.

"Babi Yar is endless pain. In this grave, the mass grave here behind me, tens of thousands of Ukrainian Jews and many non-Jews were murdered," said Netanyahu. "As prime minister of Israel, I honor their memory and at the same time I say in a clear voice, precisely in this place, that it is our constant duty to stand against murderous ideologies in order to ensure that there will never be another Babi Yar."

"I can see our brothers and sisters 78 years ago on the edge of the killing field. They were standing right here, a very small distance from us-naked, beaten and humiliated. At one point, they understood, and in their eyes was paralyzing horror. Their hearts were torn by evil cruelty. The hand of the murderers reached for the slaughtering knife and as the poet declared, the slaughterer slaughtered."

Netanyahu thanked Zelensky for "efforts to preserve the memory of the Holocaust."

Without citing anything specific, he told the Ukrainian leader: "You are continuing your efforts in the war against anti-Semitism."