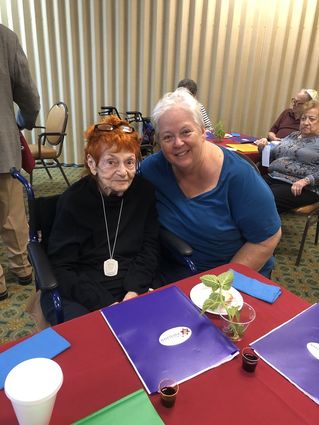 On Aug. 2nd, Ruth Donenfeld, a new resident of Cascade Heights, enjoyed her first service with the Jewish Pavilion. Michelle Bilsky, a volunteer for the Jewish Pavilion, led the service. Donenfeld had moved in just three weeks prior to coming to her first service and she found the atmosphere pleasant. She had an interesting life growing up during some of the greatest tragedies and triumphs of the 1900s. Anti-semitism was rampant during her childhood. She recalled the during her 4th grade year a childhood friend told her they could no longer being play with her because she was Jewish. As she grew older, Donenfeld felt the need to help those that were in need and became a relief worker during World War II.

After the war, Donenfeld met her Air Force husband-to-be and they were married sometime after. Due to his career in the Air Force, their family was often forced to move all over the country. In 1955, her husband was transferred to a station in Florida were she got her first taste of the Sunshine State. Her son was born the following year in 1956. However, their stay was short-lived and the Donenfelds were on the move once more. Ruth Donenfeld wouldn't move back to Florida until 1980.

Following her husband's passing, Donenfeld took comfort in her children and continued to move forward. After years of living on her own, Donenfeld made the decision to move into Cascade Heights and her daughter, Jeffri Moore, keeps her mother company when she can. They enjoyed the service performed by Michelle Bilsky and they look forward to the services ahead.