Could Israel's religious parties surge in next round of elections? 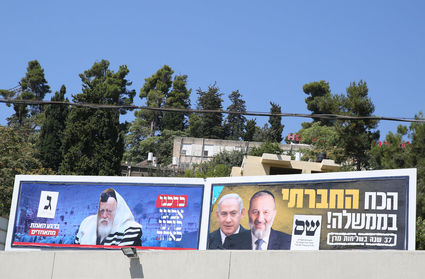 A view of billboards on a building with pictures of Rabbi Chaim Kanievsky and Israeli Prime Minister Benjamin Netanyahu, and head of the Shas Party Aryeh Deri, as part of the election campaign, in the northern Israeli city of Tzfat on Aug. 20, 2019.

(JNS)-As the Sept. 17 elections draw here, a flurry of activity among the various political parties continues to be a game-changer. Israel is holding a second round after the April 9 elections because Prime Minister Benjamin Netanyahu failed to form a coalition government, mainly due to Knesset member Avigdor Lieberman's refusal to sit in a government with the ultra-Orthodox parties. Now, those same parties may prove the sleeper of the election and might provide Netanyahu with the 61 mandates he needs to succeed.

Yitzchak Pindrus, a Knesset member from the ultra-Orthodox United Torah Judaism, told JNS that his party will win more seats than the polls indicate "because the anti-religious rhetoric in this campaign will inspire more of our voters to come out."

Pindrus is referring to several campaigns his party and voters see as anti-religious. Yisrael Beiteinu, led by Lieberman, has been running on the slogan that only Lieberman "can prevent a theocracy." The implication is that the ultra-Orthodox parties seek to impose religious laws on broader Israel, and that Lieberman is the only one who will fight such efforts. Ultra-Orthodox leaders have emphasized repeatedly that they do not seek to impose any religious laws on the general population and view Lieberman's campaign as outright incitement against them.

Additionally, one of Lieberman's core issues-one of the factors, in fact, that derailed coalition negotiations last spring-was his insistence on the passage of a military draft bill that would raise ultra-Orthodox participation in mandatory Israeli military service, an issue that was a non-starter among ultra-Orthodox party leaders.

Those leaders and their respective voters resent being painted in such a negative light-a factor that should motivate this sector to come to the polls in high numbers.

The ultra-Orthodox population is similarly motivated by what they see as the anti-religious campaign of Knesset member Yair Lapid of the Blue and White Party. Lapid ran a campaign advertisement in which he showed a fake WhatsApp group, in which ultra-Orthodox lawmakers said they wanted the country's money for themselves. Ultra-Orthodox politicians and media outlets were quick to label Lapid's ad as downright "anti-Semitic," calling on their voters to make sure that what they view as Lapid's "anti-religious agenda" will not be implemented.

Pindrus told JNS that his party is reaching out to populations beyond the most religious populations-those who "want a Jewish state based on tradition" and are upset with the anti-religion tone.

Four reasons voter turnout expected to be lower this round

Knesset member and chairman of the education committee Yakov Margi from the ultra-Orthodox Sephardic Shas party told JNS that "we will win more seats than the eight mandates currently predicted by the polls."

According to recent aggregate polls, Shas and United Torah Judaism are slated to win seven seats, each down one from the April election.

Margi explained that Shas always polls lower than the final result, just like in April when the party was polling at four seats and won eight. Margi told JNS that Shas is reaching out to new blocs of voters during their campaign and are presenting themselves as the socially minded party in a Netanyahu government. "Voters know that we mean it when we say that regardless of the election results, we will only suggest Netanyahu as prime minister. They see all the work that we have consistently done to address pressing social needs, especially in the periphery."

He noted that interest in the current elections is lower than usual for four reasons.

"First, this is the third election in one year counting the municipal election last fall, and people simply don't feel like voting again. Second, this election is not surrounding any specific issue, and voters feel that it will [result in] a tie anyway. Third, the election comes on the heels of the summer, when people tend to be much less focused. And the fourth and strongest reason is that people feel that have no one to vote for."

Stern explained that ideological parties and particularly the ultra-Orthodox, who tend to vote as homogenous blocs according to the instructions of their religious leaders, will receive a greater percentage of the total vote and more mandates if there is lower voter turnout among the general population. He similarly believes that far sides of the political-ideological spectrum, including the Democratic Camp on the left and Otzma Yehudit on the right, could also win more mandates than expected.

A recent Israel Hayom-i24News conducted by the Maagar Mohot Institute under Professor Yitzhak Katz shows that only 61 percent of eligible voters plan to vote in the Sept. 17 elections. This is a sharp drop from the 71.8 percent who voted in 2015 and the 68.5 percent who voted in April 2019. The combination of low national turnout but high ultra-Orthodox turnout would lead to more seats for the ultra-Orthodox parties.

With only three weeks until voting time, it's looking more and more likely that the election, which interestingly enough was initiated to prevent the ultra-Orthodox from holding positions of power, could crown them with more influence than ever before.