Facing tensions on multiple fronts, is Israel on the verge of an all-out war? 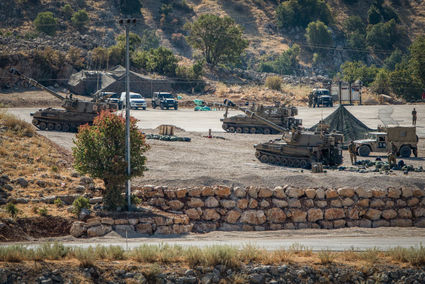 (JNS)—The big news in Israel is not that Iran attempted to send kamikaze drones into Israeli territory last week or that Israel targeted that terrorist cell in Syria; these are not completely out of the ordinary or even unexpected. Rather, what was quite the unusual occurrence took place in central Israel when Prime Minister Benjamin Netanyahu ordered officials from the security establishment to brief his chief rival, former Israel Defense Forces Chief of Staff Benny Gantz, who serves as leader of the Blue and White Party.

Why so? It’s a rare move to brief a rival like Gantz and a possible signal that Israel may be readying itself for a major conflict on one or more fronts. Hamas and Islamic Jihad in the Gaza Strip show no signs of reining in their efforts to attack Israel, and whispers and murmurings can be heard about an imminent Israeli land incursion into the coastal territory. At the same time, the Lebanese border could explode at any moment, depending on the actions of Iran and Hezbollah, while the situation in Syria continues to remain tense amid the Iranian buildup there.

Given the tensions on these fronts, is Israel on the verge of an all-out war with Iran and its proxies?

Yoel Guzansky, a senior researcher at the Institute for National Security Studies, confirmed to JNS that the attempted drone attack was Iran’s attempt “to retaliate” for various Israeli operations against Iranian forces in Syria.

But the real story, according to Guzansky, is in Iraq, where Israel reportedly bombed a weapons depot recently, as well as other targets. He said Israel’s decision-makers had “no other choice” but to do so.

Guzansky noted that while Israel may have had to take action, at the same time the complications of those kinds of operations “are quite severe.”

“You open an account with the Shi’ite militias in Iraq with whom you were not No. 1 on their priority list—and now you are on their list,” he said. “It is complicated because U.S. forces are there, and you need to coordinate.”

Guzansky also pointed out that now Iraq’s political arena is in an uproar, with some parties calling for the expulsion of U.S. troops, blaming them for coordinating with Israel. “I really hope that those attacks in Iraq were more about ‘mowing the lawn,’” said Guzansky. “In Syria, we have the upper hand. In Iraq, it is a different story. Shi’ite militias can retaliate against us from Iraq, from Syria and elsewhere.”

With regard to the threats facing Israel and whether Islamic Revolutionary Guard Corps (IRGC) Commander Maj. Gen. Qassem Soleimani will seek to take further action against Israel now, Guzansky said that the political situation in Lebanon places a lot of pressure on Hezbollah, preventing it from acting too freely. “Soleimani has more freedom of action elsewhere, in Syria, Iraq or Gaza,” he said.

There are a few possible avenues open to Iran, he said, but “I am not sure Lebanon is the more attractive one.”

What Guzansky is certain about is that Iran has reached its limit of “holding back.” He said that Soleimani and Hezbollah leader Hassan Nasrallah have now “committed themselves to respond. I do not know when and where, but I think it will come.”

On Tuesday, Netanyahu told Nasrallah to “calm down” as Israel braced for a possible retaliation from the terror group.

“I heard Nasrallah’s speech. I suggest he calm down,” Netanyahu said at a ceremony in Jerusalem, referring to rhetoric on Sunday that promised revenge on the Jewish state for Saturday’s airstrikes.

However, Guzansky said he fears that Iran and Hezbollah can do “many things,” and “not necessarily in the Middle East.”

“They have capabilities in South America and in the Far East, and they tried in the last decade in India, Azerbaijan and many other places,” he said. “They try all the time.”

‘Sanctions will determine the cost of adventurism’

Nevertheless, while Israel appears to have had the upper hand against Iranian buildup in Syria so far, the Iranians appear to be continuing their efforts, despite the setbacks.

According to Guzansky, if Iran’s aim is to establish itself militarily in Syria, it can be viewed as “quite a failure.”

On the other hand, he said that Iran’s presence in Syria cannot be isolated from the sanctions the Trump administration has placed on the Islamic regime. The IRGC has proved itself rather capable, under trying conditions, in obtaining and moving mass amounts of manpower and equipment, ever under Israel’s watchful eye. This may not necessarily be termed a success, though it might not be considered a failure either.

David Adesnik, director of research at the Foundation for Defense of Democracies think tank (which was threatened by Iran over the weekend for its hawkish stance towards the regime), agreed with Guzansky, telling JNS that “Iran’s persistent efforts in Syria and Iraq show that its failures have not resulted in defeat. The depth of Iranian influence in Syria and Iraq means that it can keep trying to build up offensive capabilities for as long as it has the necessary resources.”

Adesnik also pointed to the significant role the Americans can play in reigning in Iran.

“In that regard,” he said, “it is the U.S. which has a decisive role to play since its sanctions will determine whether the cost of adventurism across the Arab world becomes too much for Tehran to bear.”

With regard to Israeli attacks on the weapons caches of Iranian-backed militia in Iraq, Adesnik said this serves to “prevent the emergence of more advanced capabilities or the transfer of such capabilities to partners at other points along the land bridge to the Mediterranean Iran is now building.”

Looking westward, he said that “Iran wants Syria to become a second front on Israel’s northern borders, alongside Hezbollah strongholds in Lebanon. Beyond propping up [Syrian President Bashar] Assad, Tehran has consistently sought to develop offensive capabilities in Syria.”

Answering the question of whether Soleimani seeks revenge or is managing a larger plan, Adesnik confirmed that it’s all “part of a concerted and enduring campaign—not mere retaliation for Israeli actions in Iraq or Syria earlier this summer.”

Circling back to whether Israel will find itself at war in Gaza, Lebanon, Syria or all three, Adesnik said that he doubts Iran seeks an all-out war at the moment. Rather, he said, “Tehran is trying to shape the rules of the undeclared war, or ‘gray zone’ conflict, that Israel and Iran are already fighting in Syria.”

Those rules, he noted, have already been established in Lebanon, where Iran has built up a significant arsenal of missiles without any retaliation or preemptive attacks by Israel against targets there.

On the Syria front, Adesnik said that Israeli airstrikes “seem to have prevented Iran from establishing anything like the capabilities the pro-Iran ‘axis of resistance’ has in Lebanon.”

Still, speculation abounds as to whether Netanyahu’s order to brief Gantz is a sign that Israel is preparing for a major conflict on one or more fronts.

“We need to be careful and open our eyes,” cautioned Guzansky. “I think something is coming up. This is the quiet before the storm.”