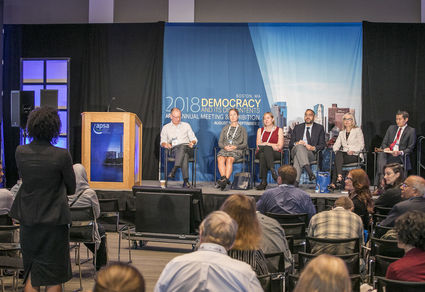 The 2018 American Political Science Association's annual conference. At their 2019 meeting, a group of political theorists is expected to discuss a resolution to boycott Israeli academic institutions.

While the "Academic Boycott Resolution" will only be discussed and not voted on during the Aug. 31 meeting, the Academic Engagement Network nonetheless expressed alarm towards the APSA, which was founded in 1903 and is "the leading professional organization for the study of political science and serves more than 11,000 members in more than 100 countries," according to its website.

In a letter to APSA executive director Steven Smith, AEN, which consists of APSA members, expressed concern that the resolution, which is expected to be introduced by APSA's Organized Section 17, Foundations of Political Theory, will "further a virulently anti-Israel agenda and the goals of the BDS movement" and "not allow a fair discussion of the resolution."

"Indeed, the resolution's sponsors have already shown that they are uninterested in debate or dialogue with those opposed to academic boycotts in general and of Israel's academy in particular," continued the letter, which was written by AEN's chair Mark Yudof; executive director Miriam Elman; and deputy executive director Michael Atkins. All three call for the discussion to be "robust and even-handed."

Several other academic associations have also considered a boycott of Israel in the past. Most notably the American Studies Association passed a resolution to boycott the Jewish state in 2018, while the Modern Language Association rejected a resolution in 2017.

The BDS resolution (obtained by JNS) cites the intersection of politics and government-that "Israeli academic institutions are complicit in Israel's settler colonization of Palestine, and the attendant ethnic cleansing, dispossession, military occupation, and apartheid policies that constitute this colonization."

For the record, there is no country called "Palestine," and most Palestinians are under control of the Palestinian Authority in the West Bank or the terrorist group Hamas in the Gaza Strip.

The AEN letter meticulously refutes the FAQ provided by the pro-boycott group, which it called "unsourced," including the group's claims that the boycott would only target Israeli institutions and not Israelis themselves; BDS isn't anti-Semitic; and that Palestinians have a right to defend themselves with violence.

At last year's APSA's conference, the same Section 17 members conducted a roundtable titled "BDS and Political Theory" where, according to AEN's letter, "only BDS proponents were included and in which diverse viewpoints on this issue were rejected out of hand."

"Given their stated position, we are concerned about the possibility for a lopsided discussion where, even if there are many APSA members opposed to academic boycotts present in the room, the conversation will be monopolized by the Resolution's supporters and only BDS proponents will be heard," said AEN. "We urge you to ensure that the discussion at the August 31 meeting is robust and even-handed. We hope that our members and others who plan to attend the meeting to voice their concerns will be given an ample opportunity to do so."

Smith "did graciously acknowledge AEN's letter" and mentioned that diverse viewpoints will be allowed at the meeting and that all APSA sections are prohibited by APSA bylaws from releasing public statements, AEN senior communications associate Raeefa Shams told JNS.

"If the American Political Science Association goes through with this anti-intellectual boycott, they'll have to rename themselves as the American Political Activism Association," said Alexa Rittenberg, who works for CAMERA on Campus, "because they won't be practicing or advancing science, but promoting a misinformed political campaign that lies about the Jewish state."

AMCHA Initiative director Tammi Rossman-Benjamin said that her organization is "deeply alarmed" by the resolution.

"These professors are calling on their academic colleagues, most of whom are also faculty at U.S. colleges and universities, to follow the official academic BDS guidelines, which call on faculty to work towards closing their school's academic-exchange programs in Israel; to refuse to write letters of recommendation for their students who want to study in Israel; to sabotage their colleagues' collaborations with Israeli scholars; and to disrupt or shut down educational activities about Israel or featuring Israeli scholars or leaders that are organized by professors and students on their own campus."

Club Z executive director Masha Merkulo va noted that "this is not the first or last attempt to politicize education by introducing a BDS resolution. This is part of a larger trend to normalize bigotry in academia. The Jewish community must come together and make it clear that lies perpetuated in this forum will not be tolerated."

"If these professors actually cared about justice, freedom and equality-and learned just the basics of historical facts, not narratives-they will know that the establishment of the modern State of Israel is the ultimate restoration of justice," she said. "They will also know that equal freedoms and human rights are given to every single citizen of the State of Israel, including Arabs and all other minorities. Jews are the indigenous people of the region who have achieved the ultimate goal of expelling the British colonialists and re-established their sovereign state."