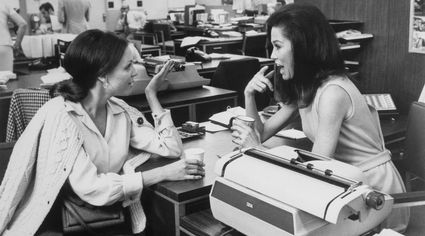 (JTA)-Theater folk in England are debating a recent revival of the musical "Falsettos," asking whether non-Jews should be playing its Jewish characters. In an open letter, critics of the religion-blind casting complain that non-Jewish actors can at best portray only a "secondary understanding" of Jewish mannerisms but have no awareness of the "psychology, geography, culture and history that have framed these outward signifiers of Judaism."

To the perennial debate over whether non-Jewish actors can or should play Jews, I have a two-word answer: "Rhoda Morgenstern."

Valerie Harper, who died last week at age 80, starred in "The Mary Tyler Moore Show" as the earthy, wise-cracking, Bronx-born neighbor and best friend of the WASPy, reserved, carefully coiffed TV producer played by Moore. She was so convincing as Rhoda that many viewers had a hard time believing that Harper herself was not Jewish.

"Listen," she would tell such fans, "in my heart, I'm Jewish. And if you go back far enough, we're all Jewish. The Jews are an ancient people, " according to her 2013 memoir "I, Rhoda."

In the history of that people, Jews always served as a convenient foil for gentiles, a tradition that began with the Gospels and continued in "The Mary Tyler Moore Show," which debuted in 1972. Rhoda was Mary's opposite, in looks and temperament. Considered plump only by the body-shaming perspective of a television sitcom, she envied Mary's figure and her poise, but also served Mary by helping her shed some of her Midwestern reserve. Her Jewish neuroses balanced Mary's gentile insecurity. She said out loud what Mary had a hard time admitting to herself. She threw Mary's character into high relief, and Mary returned the favor.

"You're talking about Midwestern love. I'm talking about Bronx love," Rhoda tells Mary in Season 1. "There's a certain amount of guilt that goes with that. My mother wants the people she loves to feel guilty."

Harper was very much aware of how Rhoda's Jewishness informed her relationship with Mary. Describing her character, she once said in an interview, "All I could do was, not being as pretty, as thin, as accomplished, was: 'I'm a New Yorker, and I'm going to straighten this shiksa out.'"

"The Mary Tyler Moore Show" is remembered as a feminist breakthrough in television, depicting women who were single and career-minded and not defined only by their relationship to the men in their lives. The Rhoda character was groundbreaking too: the first Jewish leading character on TV, Neal Gabler reminds us, since Gertrude Berg starred as Molly Goldberg on CBS from 1949 to 1951.

And just as Mary represented a soft feminism, Rhoda represented soft ethnicity: Although her Jewishness was rarely made explicit (except perhaps for that last name, which the protagonist of Herman Wouk's 1955 novel "Marjorie Morningstar" had shed in the name of assimilation), her outward Jewish signifiers were apparent.

This has earned the show's creators both praise and criticism. Marlene Marks wrote in the Jewish Journal in 1991 that Rhoda proved "there was more to the Jewish woman than the stereotype. She was not a princess. She was not a shrew. Yes, she was an underdog, but not a loser."

By contrast, a character in a Francine Prose short story, "Electricity," is described as "assimilated to the point of Jewishlessness, like Valerie Harper playing Rhoda."

But her Jewishness was nonetheless out there, by the standards of the day, no more so than in the Season 2 episode titled "Some of My Best Friends Are Rhoda." Mary makes a new friend, Joanne, leaving Rhoda feeling snubbed. The friendship sours, however, when Joanne invites Mary to a club that prohibits Jews, and Mary defends Rhoda.

When CBS spun off the character for Harper's own show, "Rhoda," some of her recognizably Jewish attitude didn't survive the transition. Although she moves back to New York and gains a stereotypically Jewish mother, Rhoda herself sheds some of her Jewish tics (and more than a few pounds). The ethnic burden, like many of the best lines, was given to Julie Kavner as her younger sister, Brenda.

When Rhoda marries-more than 50 million viewers tuned in for the episode-the fact that her husband isn't Jewish is barely treated as a plot point. Maybe that's why so few Jews objected to this much-hyped portrayal of interfaith marriage, especially compared to the communal conniption fit that greeted "Bridget Loves Bernie," an intermarriage sitcom from just a few years earlier. Rhoda left her Jewishness, along with her best friend, back in Minnesota. And for anyone who has never felt more Jewish than when they leave the Jewish "ghettos," that's a familiar feeling.

In the absence of positive expressions of Judaism-ritual, language, dress and what the sociologists call "propinquity"-ethnic Jewishness only becomes apparent in the things that we are not: New York, not Minnesota; loud, not reserved; carnal, not buttoned up; wittily self-deprecating, not morbidly self-lacerating. It was how a rapidly assimilating Jewish community began to think of what it meant to be Jewish.

Rhoda wasn't the first Jewish character to be understood in contradistinction to the non-Jews with whom she shared a stage. But never before was that stage so large, nor the character so delightful.