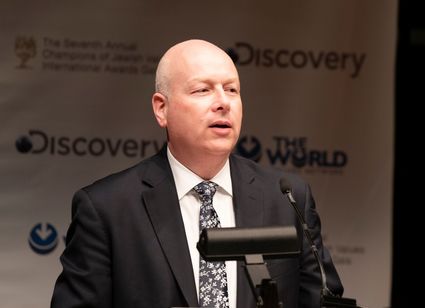 Although the "ultimate" deal he helped craft has yet to be fully announced, the Trump administration suggested in the announcement that Greenblatt was leaving now that it had been written.

A senior White House official said the plan is done.

"The vision is now complete and will be released when appropriate," the official said in an email.

Greenblatt said in a statement: "It has been the honor of a lifetime to have worked in the White House for over two and a half years under the leadership of President Trump. I am incredibly grateful to have been part of a team that drafted a vision for peace. This vision has the potential to vastly improve the lives of millions of Israelis, Palestinians and others in the region."

Trump thanked Greenblatt on his favored forum, Twitter, noting Greenblatt's prior role as a lawyer for Trump's businesses.

"Jason has been a loyal and great friend and fantastic lawyer," Trump said. "His dedication to Israel and to seeking peace between Israel and the Palestinians won't be forgotten."

Barely mentioned in the statements released by the White House from Greenblatt and his colleagues, including Trump's son-in-law, Jared Kushner, who headed the peace team, were the Palestinians.

"Jason has done a tremendous job leading the efforts to develop an economic and political vision for a long sought after peace in the Middle East," he said. "His work has helped develop the relationships between Israel and its neighbors as he is trusted and respected by all of the leaders throughout the region. He is a close friend and partner and will continue to make a positive impact on the world."

The low-key rollout of Greenblatt's departure reflects how curtailed the initiative launched by Kushner has become, from Trump's pledges in 2017 to bring about an "ultimate deal" to 2019, when Kushner downgraded "peace plan" to "vision for peace" and Greenblatt appeared to spend much of his time advising Palestinians to curb their enthusiasm.

This summer, the Trump administration rolled out the economic portion of the plan, which relied heavily on regional Arab businessmen investing in the West Bank and the Gaza Strip. Palestinian officials boycotted the rollout in Bahrain, and Israeli officials were not invited to attend.

The release of the political portion of the plan has been delayed in part because Trump is sensitive to how its release will affect the electoral prospects of Israeli Prime Minister Benjamin Netanyahu, the world leader to whom Trump is perhaps closest.

The Palestinians, who were enthusiastic initially about the push led by Kushner, were embittered in December 2017 when Trump recognized Jerusalem as Israel's capital. They have since said that the plan is a stalking horse that embraces outcomes favored by hard-line Israelis and that David Friedman, the U.S. ambassador to Israel who has longstanding associations with hard-liners in the settlement movement, appeared to be the preeminent figure on the peace team.

Kushner also retreated from the two-state outcome favored by Trump's predecessors, instructing his team not to use the term "two states."

Notably, the senior administration official, in listing Greenblatt's accomplishments, did not include anything that might be seen as conciliatory toward the Palestinians. Instead, the official emphasized Greenblatt's advocacy for the recognition of Israel's claims to Jerusalem and the Golan Heights.

"Jason was instrumental, together with others in the administration, when the president recognized Jerusalem as the capital of Israel, moved the U.S. Embassy to Jerusalem and recognized Israeli sovereignty over the Golan Heights," the official said.

The official also alluded to Greenblatt's transition from his first year on the job, carefully listening to multiple parties, to his second and third year, jousting on Twitter with Palestinian officials about U.S. policies.

"Jason has also been instrumental in helping to reframe the discussions about the conflict, using the approach that a real peace can only be built on truth," the official said.

Greenblatt's resignation, which will come in weeks, also underscores how Trump's Middle East policy is now overwhelmingly dedicated to aligning Israel and America's Sunni Arab allies against Iran. The senior administration official said that Brian Hook, the State Department's top Iran official who has led the charge squeezing that country's finances, will formally join the team.

Ivanka Trump, the president's daughter and adviser and Kushner's wife, also commented on the departure.

"The kindness and unique talents of Jason Greenblatt, a dear friend and colleague, will be missed in the White House," she said. "We know he will continue to impact the world for the better."

Friedman also weighed in, and like Kushner made no mention of the Palestinians, instead offering an implied dig at the Obama administration and casting Greenblatt's mission as including the improvement of U.S.-Israel relations.

"It's been a tremendous privilege to work with Jason these past few years on the critical tasks of repairing and strengthening the U.S.-Israel relationship and seeking peace and stability within the Middle East," Friedman said.