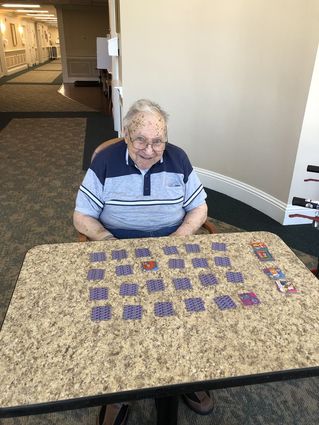 Joe, a resident of Westminster.

Match-It is a game that is pretty self-explanatory. There are a set number of tiles that each have a picture on them with each tile having a match. You flip them over, scramble them, set them into rows, then get to trying to match them. If there is only one player, then it's a free for all and you can play to your hearts content by flipping them over and seeing where each matching tile is without fear of another person getting the match. If there is more than one player, then you take turns flipping over two tiles at a time and whoever gets the most matches wins.

At Westminster, instead of having individuals play against one another, Hope McCormack from the Jewish Pavilion had people divided into teams and the teams compete to see who could get all the tiles matched first. Both teams did great and it was a close game but residents Joe and Jane came out victorious in the end. Joe had a great time explaining to Jane what the tiles had to do with Judaism. After explanations from McCormack were given to everyone about the tiles and their ties to Judaism, the residents enjoyed some fruit before departing for their next destination.

At Brookdale Dr. Philips, there are only two Jewish residents, so the Match-It game turned into a short lesson on Judaism. McCormack once again broke the residents into teams and had them play against one another, however, as they matched the tiles together explanations on how they represent Judaism and its culture were given. The residents loved learning about the Menorah and why the candles are lit every night for eight nights and also about Tefillin and how they contain Hebrew parchment scrolls.

Overall, the residents at the different facilities loved playing Match-It: Jewish Edition. Not only did they get to learn about Jewish culture, but they also got to use their minds to memorize where each tile was and where its match was located. When asked, Joe from Westminster said, "A game that forces us to use our minds is the best game you could come up with."

Match-It definitely forced the residents to use their minds and have fun doing so.