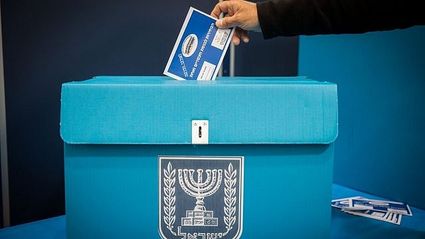 According to the latest vote count, Prime Minister Benjamin Netanyahu is trailing his rival, Benny Gantz, by the slimmest of margins: The incumbent's Likud and the challenger's Blue and White remain within a seat of each other.

More important, neither candidate appears able to form a governing coalition outright with allies on the right or the left. In the 120-seat Knesset, the right won 55 seats and its opposition, comprised of the left and center, won 56. But 61 seats are needed for a majority.

That means the one party in the middle of the two groups, called Yisrael Beiteinu, could be the kingmaker. The party, which is hawkish and secular, is led by former Defense Minister Avigdor Liberman, and he wants to be part of a unity government with Netanyahu and Gantz.

Despite concerns of voter fatigue in a second election in 2019, the final voter turnout was 69.4 percent. That's 1.5 percent higher than in April.

While we wait for the outcome, here are five things to watch from Tuesday's election.

Is unity the name of the game?

Liberman doubled down on a unity government in a speech to supporters Tuesday night.

"We have only one option. A liberal, national, broad unity government made of Yisrael Beiteinu, Likud, and Blue and White," he said to cheers. In the past, he has called this a "secular unity government." Liberman has steadfastly refused to join with the Orthodox parties and said he will not sit in a government with them.

The ex-defense chief is in a strong position. He literally holds the seats that both Netanyahu and Gantz need to form a government. And Liberman, a former club bouncer, told supporters that he would not give up his dream of unity, no matter what sweet deals he is offered by Netanyahu or Gantz.

But Netanyahu and Gantz were up half the night looking for other options.

The sitting prime minister already has spoken to his right-wing base, including the Orthodox parties. Netanyahu also reportedly reached out to the center-left Labor Party, which apparently rebuffed him.

Gantz, a former army chief, has said he is open to a unity government with Likud, but only if Netanyahu is no longer helming the party. Meanwhile, he is leaving his options open and reached out to the leader of the Arab-Israeli Joint List party, Ayman Odeh, who reportedly agreed to meet.

The Arab parties traditionally do not sit in the government, though they have supported the Zionist left in the past. Odeh has said that he is interested in being the leader of the Knesset opposition, which includes attending national security briefings.

The Arab-Israeli Joint List is back and more powerful than ever.

The coalition of four Arab parties is slated to get 12 seats, one less than its all-time high in 2015, but more than the parties received when they split up in the April elections.

Part of their success can be attributed to Arab voter turnout, which is traditionally low but may have been higher this time. It was estimated to be as high as 65 percent on Tuesday. By contrast, Arab voter turnout in April was 49 percent, the lowest ever.

What about Netanyahu's corruption cases?

Likud, it seems, can't live with him and can't live without him. Netanyahu has pledged to remain at the head of the party and as prime minister for the long haul.

That's despite the fact that he will almost definitely be indicted for corruption at a hearing in about two weeks, right after Rosh Hashanah. Attorney General Avichai Mandelblit has announced his intention to indict Netanyahu, and at the hearing, the onus is on Netanyahu to provide enough good reasons not to indict him. Currently, Netanyahu is facing three separate corruption cases.

Netanyahu has vowed not to step down if indicted, unlike past prime ministers who have resigned while facing indictment. If Netanyahu is able to form a government, chances remain high that it will try to pass a law giving him immunity from being prosecuted while holding office.

Likud members appear to be standing by their man. On election eve, Foreign Minister Yisrael Katz declared that "Netanyahu was and remains the Likud's only candidate for prime minister." But time will tell if that conviction lasts.

What about Trump's Israeli-Palestinian peace plan?

In the waning days of the campaign, the Trump administration's long-awaited Middle East peace plan became a major issue. The right-wing Yamina party posted what it claimed was Trump's proposed map of the West Bank, including enclaves of Israeli settlements surrounded by Palestinian communities. Yamina said the map was unacceptable and blamed Netanyahu for being complicit.

It is not clear exactly when the plan will be released. Earlier this month, Netanyahu told his supporters that the plan would be made public very soon after the elections.

U.S. Middle East peace envoy Jason Greenblatt, an architect of the plan, announced that he would step down from his position earlier this month, but said he would be available in the immediate aftermath of the plan's release. The plan's other architects are Trump adviser and son-in-law Jared Kushner, and David Friedman, the U.S. ambassador to Israel.

A rollout of the plan could help Netanyahu make the case that only he has the ear of Trump and Kushner, and only he can negotiate a good deal for Israel.

Now the ball is in the court of President Reuven Rivlin, who asks each party to recommend a candidate for prime minister. The president traditionally taps the person with the most recommendations from individual parties to try to form a coalition. If no candidate has a majority, Rivlin is supposed to pick the one he thinks has the best shot.

Whoever Rivlin selects will then have four weeks to form a government, and can ask for an additional two weeks if needed. If the candidate still comes up short, the president can tap someone else to take a shot at forming a government.

Following the April elections, when Netanyahu was unable to form a government, he and his party dissolved the Knesset rather than giving his rivals a chance to replace him.

Rivlin really wants to avoid that outcome this time. In a video posted late Monday on Facebook, Rivlin promised "I will do everything possible according to the law and to the powers granted me in my role that Israel has an elected government as soon as possible and that we avoid another election campaign."