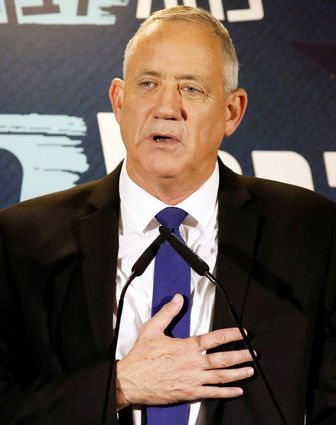 (JNS)-Blue and White leader Benny Gantz rejected Israeli Prime Minister Netanyahu's call to join a unity government under the Likud leader's leadership, stating that he would be prime minister of a potential unity government.

"I am interested [in] and intend to form a broad, liberal unity government under my leadership," Gantz said in a statement ahead of Blue and White's first faction meeting since the elections.

"To form a unity government you do not come forward with political blocs and spins but rather honesty, statesmanship, responsibility and seriousness," he said, referring to Thursday's agreement among the right-wing and religious parties to conduct coalition negotiations together, under Netanyahu's leadership.

Just moments after Gantz's announcement, Netanyahu said in a statement, "I was surprised and disappointed that as of now, Benny Gantz still refuses to respond to my call to meet. The president called for a unity government, but without a meeting between the two major party leaders, it is impossible to form a unity government."

"The State of Israel needs as broad a unity government as possible-not another election and certainly not a government that relies on anti-Zionist parties," he added, referring to the Joint Arab List, which received 13 seats according to latest figures, making it the third-largest party in the Knesset.

According to the latest figures with 95 percent of ballots counted, Gantz's party won 33 Knesset seats, compared to Likud's 31.