RAISE, the Jewish Federation of Greater Orlando's work and social skills training program for adults with special needs has unveiled two new logos. Both can be seen on RAISE's Facebook page. One logo will be used for the local ongoing program and the other, designated "RAISE on the Road," will be used as RAISE begins to market this unique and successful concept to other Jewish communities across the country.

The new logo for the RAISE program was designed by the senior graphic designer of ASD Adult Achievement Center. Founder and president of ASD, Paula Breeden, was a volunteer as a RAISE job coach. Soon thereafter, Breeden opened ASD Achievement Center. In partnership with Bright Feats Directory, the program offers young adults on the autism spectrum an opportunity to learn new vocational skills in the graphic design and technology industry. Bright Feats publishes an educational and special needs directory and maintains an information-rich website.

The relationship between RAISE and ASD Adult Achievement led to the creation and their donation of the new RAISE logo.

RAISE on the Road 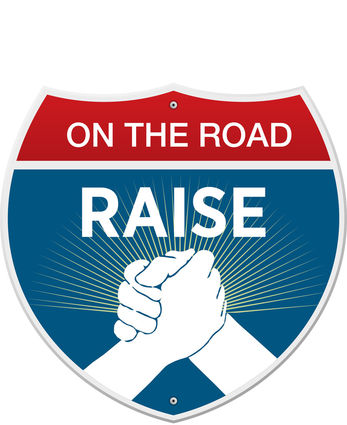 At the request of other Jewish communities to replicate the program, RAISE has been developing a program called "RAISE on the Road" to facilitate teaching in a seminar format. This logo captures the essence of what RAISE is all about. The clasped hands represent adults with special needs working together with a bevy of volunteers and professionals. The "RAISE on the Road" logo was designed by a former RAISE employee. Dean, who while in RAISE worked at Jewish Family Services and the Jewish Academy of Orlando, has a background in graphics arts and was thrilled to be offered the opportunity to design this logo. He spent many hours creating and refining the logo with Federation staff. Dean completed his training with RAISE last year and now has a job at United Cerebral Palsy's aftercare program.

According to Rachel Slavkin, RAISE director of Employment and Education and Social Bridges lead facilitator, RAISE plans to launch its "RAISE on the Road" program in the near future.

Collaboration with Jewish agencies and businesses in the Orlando community has been a priority for RAISE since its inception in 2012. This fall, RAISE will enter its sixth operational year providing paid, supported employment at partnering agencies and transition to employment in the community. The RAISE program is supported entirely by donations. If you would like to donate to RAISE, please visit jfgo.org/RAISE.