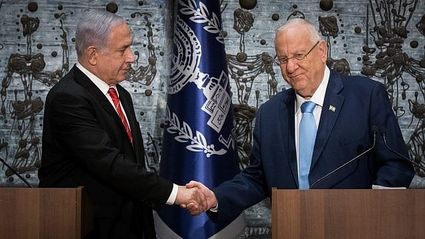 (JNS) With negotiations between Israeli Prime Minister Benjamin Netanyahu, and Blue and White leader Benny Gantz, failing to form a national unity government, Israel's President Reuven Rivlin ultimately choose Netanyahu as having the best chance to form a government within the next 28 days. However, with Netanyahu only garnering support of only 55 Knesset members-six short of a governing majority-it appears that Israel's political deadlock will continue with both sides blaming one another for the impasse.

Former Likud Defense Minister Moshe Ya'alon, now of the Blue and White, told JNS that "Netanyahu torpedoed the possibility of there being a national unity government between Likud, and Blue and White, by coming to the negotiations insisting that the right-wing and religious parties be included from the start."

Ya'alon also made it clear that his party will not sit in a government with Netanyahu because of the corruption charges he faces, as they promised during the elections, telling JNS that "the State of Israel needs clean and unifying leadership that is an example to the rest of the citizens. Netanyahu, who faces three possible indictments and has incited and generated hatred towards entire populations in Israel, is the exact opposite of that."

Likud Knesset member and former Jerusalem Mayor Nir Barkat told JNS that "Likud won't agree to allow anyone else to determine who its leader should be and won't accept a ban of its democratically elected chairman."

Sources within Likud tell JNS that Netanyahu plans to give the mandate back to the president next week since none of the other 65 members of Knesset are willing to even talk with him about joining his government.

At that point, Rivlin can give Gantz 28 days to try to form a government, though he is considering not even offering Gantz an attempt because all he has are 44 possible coalition partners, with no other Knesset members willing to negotiate with him.

'Our ideology is more important than our seats'

What happens if neither Netanyahu nor Gantz succeed in forming a coalition, or if Rivlin decides to skip over Gantz?

At that point, the mandate is given to the Knesset for a 21-day period during which any Knesset member can try to find 60 supporters for prime minister. If at the end of those 21 days, no one has come to the president with a governing coalition of 61 seats, elections are automatically called for 90 days later on a Tuesday.

Blue and White is hoping that during the said three weeks, Likud members who don't want to see a third election will rescind their support for Netanyahu and rally behind another senior Likud member to form a unity government with Blue and White without Netanyahu's involvement.

But Knesset member Keti Sheetrit, who has the most to lose if a third election is called as she barely squeaked into the Knesset with Likud's 32nd and final spot, told JNS that "this won't happen. Likud does not push away its chairmen. Our ideology is much more important than our seats in the Knesset."

Rivlin announced on live television that he suggested a solution to enable the creation of a national unity government. The current law allows for a prime minister to step down for up to 100 days and then return to his position leading the country. The president suggested changing the law and allowing a prime minister to step down without a limit to this recess period.

He suggested a unity government in which Netanyahu starts as prime minister, but if indicted, he would step aside for as long as his court case would take, In the meantime, Gantz would lead. If Netanyahu is then exonerated by a judge in a trial (which could take as long as two years), then he would be allowed to return and finish this Knesset term as premier in place of Gantz.

Sources involved with the negotiations have told JNS that Netanyahu accepted the deal, and that Gantz was strongly considering it because he could tell his supporters that they would not be sitting with a prime minister under indictment. But others within Gantz's camp were strongly against the idea, and Gantz released a statement saying that his party would not join a government led by a prime minister even facing the possibility of an indictment.

Naftali Bennett, former economic and education minister who is part of Netanyahu's right-wing bloc, tweeted in response that Rivlin's compromise idea was "creative and smart."

He continued, "Netanyahu said 'yes.' Gantz wants to say 'yes.' The people of Israel are praying for a 'yes.' And Yair Lapid said 'no.' "

Lapid is the head of the Yesh Atid faction, part of Gantz's Blue and White Party. Lapid has been known for his stronger stance against Netanyahu and Bennett, among other MKs, and blames Lapid for breaking up the unity government talks. Members of Lapid's Yesh Atid faction replied that Netanyahu's insistence on remaining as the head of Likud and its candidate for prime minister is the reason why a unity government is not being formed.

Avigdor Lieberman's Yisrael Beiteinu, which has been unwilling to bring their eight seats to enable Netanyahu to form a government due to disagreements over religion and state issues, remain a wild card. Lieberman told an Israeli Russian-language radio station that he is willing to negotiate with the Likud "without preconditions." Perhaps that signifies a softening due to the dire circumstances, as well as a breakthrough for Netanyahu from that direction.

At the moment, however, with Likud sticking to Netanyahu, and Blue and White insisting that it won't sit with Netanyahu-and with parties from the left or the right not showing any willingness to work with the other side, and no serious negotiations taking place with Lieberman-it's looking more likely that Israel may face its third national election in the course of a single year. So much so that possible election dates in January and February 2020 are already being discussed.