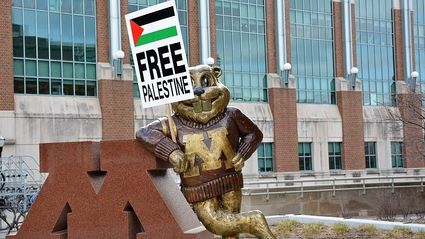 A "Free Palestine" sign on display with the University of Minnesota's gopher mascot that was erected by the school's Students for Justice in Palestine chapter.

(JNS)-Amid increasing concerns over Israel-related anti-Semitism found on college campuses, the anti-Israel group National Students for Justice in Palestine announced its upcoming national conference at the University of Minnesota from Nov. 1-3.

The NSJP says that the conference is titled "Beyond Struggle: From Roots to Branches Towards Liberation," and recognizes the "support for the Palestinian cause is increasing within mainstream politics," noting the inflammatory words and actions of Reps. Rashida Tlaib (D-Mich.) and Ilhan Omar (D-Minn.). The University of Minnesota is in Omar's district.

According to NSJP, their national conference will attempt to achieve the following goals: recognize the current political climate and build on the visibility of Palestine; bridge the grassroots and grasstops; articulate the full history of Palestine as intertwined with the future of liberation; and reaffirm the fullness of Palestinian liberation.

Last year, the SJP chapter at the University of Minnesota sponsored a pro-BDS resolution that passed a student-wide referendum. That resolution was condemned by university's president, Benjie Kaplan, who said that the resolution could have a "harmful impact to our campus climate," and that the BDS movement fails to delineate "between opposition to the policies of the government of Israel and opposition to the existence of Israel."

Established in 2010, NSJP (per its website) has nearly 200 chapters on college campuses across the nation and claims to stand against "homophobia, misogyny, racism, anti-Semitism, Islamophobia, classism, colonialism, ableism, and bigotry and discrimination of any form."

The 2018 National SJP conference at UCLA drew widespread condemnation from Jewish students, pro-Israel groups and local politicians, many of whom called for the conference to be canceled. The conference was themed "Radical Hope: Resistance in the Face of Adversity." The conference website stated: "[T]he reason we can have hope is that Zionism... can be destroyed."

Last year, students and pro-Israel leaders spoke out against SJP's National Conference at its school, with many upset that the conference was closed to the public. The Los Angeles City Council also passed a resolution that called for the 2018 conference to be canceled, and Rep. Brad Sherman (D-Calif.) also denounced the conference. Nevertheless, the chancellor at UCLA, Gene Block, allowed for the conference to take place despite his "fundamental disagreements" with the group.

According to the anti-Semitism watchdog group Canary Mission, the 2018 SJP National Conference featured several speakers who have promoted and glorified terrorism. The report exposes 112 attendees for endorsing violence, showing support for terror and spreading anti-Semitism at both the conference and on social media.

Among those keynote speakers who Canary Mission uncovered were:

• Rabab Abdulhadi, a founding members of the U.S. Campaign for the Academic and Cultural Boycott of Israel and professor at San Francisco State University, who has "has cultivated ties with Hamas-dominated universities, glorified terrorists, trivialized the kidnapping and murder of Israeli high-schoolers, and endorsed hate speech."

• David Palumbo-Liu, a professor at Stanford University and a member of the U.S. Campaign for the Academic and Cultural Boycott, who has "has excused errorism, demonized Israel and defended anti-Israel agitators."

• Hatem Abudayyeh, a BDS activist, who was has supported a terrorist, praised terror organizations and called for Israel's destruction."

• Ahlam Muhtaseb, a professor and graduate coordinator in the Department of Communication Studies at the University of California, San Bernardino, who has "spread incitement, glorified terrorists, praised the violent "March of Return" and demonized Israel. She has also defended anti-Israel agitators.

Additionally, several 2018 conference attendees and organizers are active leaders in the BDS movement, while also having been accused of spreading anti-Semitism, incitement and praising Palestinian terrorists.

Anti-Israel groups such as SJP are tied to an alarming spike in Israel-related, anti-Semitic events on American campuses. The number of such incidents against Jewish students on campuses increased 70 percent from 2017 to 2018, according to a report published Tuesday by the nonprofit watchdog AMCHA Initiative.

"I'm unhappy with the choice of SJP to hold their conference over a weekend where they know they will not be able to face contention or conversation from Jewish students because of Shabbat," University of Minnesota senior Avi Shaver told JNS. "It's harmful to the dialogue of such an important and nuanced conflict. I am also afraid of who they will bring as speakers because I don't know if they are to follow guidelines on what they can say and if they will follow them. Inciting hate rhetoric has no place here."

The U.S. Bill of Rights protects freedom of speech, which is applicable to a place such as the University of Minnesota.

"As a public institution, the University of Minnesota is bound by the First Amendment and cannot discriminate on the basis of viewpoint when making resources available to students, faculty or the general public," Adam Steinbaugh, the director of the Individual Rights Defense Program at the Foundation for Individual Rights in Education, told JNS.

Hateful rhetoric, behavior should not be tolerated

A number of pro-Israel groups have spoken out against the conference and are taking action to urge the school to cancel the conference.

Students Supporting Israel has launched an online petition calling on the University of Minnesota to cancel the upcoming NSJP conference.

"Because of SJP's closed-door policy of not allowing any non-SJP students to attend the Conference, University of Minnesota is essentially allowing SJP to continue spreading their messages of RACISM, VIOLENCE, ANTI-SEMITISM and support of known TERRORISTS," the group said in their petition.

Additionally, SSI, which was founded at the University of Minnesota in 2012, said that if the school refused to cancel the event, it will call for an investigation "for violation of Title VI of the Civil Rights Act which prohibits discrimination on the basis of race, religion, color, or national origin (including anti-Semitism) for federally assisted programs and activities."

"We hope that the University of Minnesota's administration will take the appropriate actions in rejecting a distinguished violent group like Students for Justice in Palestine to host their national conference on our campus," SSI said in a statement. "In doing so, the administration will set a national example that denial of free speech, disruptions, intimidation of students and violence are not tolerated in the academic community."

AMCHA Initiative co-founder and director Tammi Rossman-Benjamin told JNS that "at the heart of the national SJP organization and its campus chapters is an anti-Zionist ideology that incites its members to engage in activities designed to harm not only Israel, but Israel's on-campus supporters, primarily Jewish students."

She said "these behaviors time and again deprive Jewish and pro-Israel students of their freedom of speech, assembly and association, and deny them access to a campus safe from harassment. SJP's intolerant behaviors are often viewed by university administrators as politically motivated, and are therefore overlooked and unaddressed, leaving Jewish and pro-Israel students vulnerable and afraid. However, harassment is harassment, regardless of the motivation of the perpetrator or the identity of the victim."

Rossman-Benjamin called on "the University of Minnesota-and frankly, all university leaders-to make clear to SJP and all its students that while anti-Zionist speech is protected under the First Amendment, the intolerant behavior such rhetoric often incites will not be tolerated. Jewish and pro-Israel students must be afforded the same protections as all other students."

'In direct obstruction of dialogue'

Joseph Sabag, executive director of IAC for Action, said that "SJP is an anti-Semitic hate organization and we hope that no school would welcome them."

"The real issue at hand is not SJP's free speech, but the university administration's own free speech and their need to exercise it. Our hope is that the University of Minnesota will not tolerate anti-Semitic/Israel hatred and will clearly explain to its student body that although hateful and offensive speech will sometimes appear on campus, it should be called out by name and condemned clearly with moral clarity," he said.

StandWithUs executive director of research and strategy Max Samarov told JNS, "UMN should unequivocally condemn SJP's long record of promoting hate, silencing free speech, and supporting violence. While the university may have no legal way to stop the conference, we hope the administration will ensure a safe environment for all students, particularly after this hateful event is over."

"The National Students for Justice in Palestine conference threatens to create a discriminatory environment at the University of Minnesota," said Alums for Campus Fairness executive director Avi Gordon. "Words like 'Palestinian struggle against Zionism' isolate Jewish and Zionist students on campus and are in direct obstruction of dialogue."

"This conference must be viewed against the larger backdrop SJP's bigotry and anti-Semitism across the country," he continued. "Alums for Campus Fairness calls on the University administration to make it clear that SJP's hateful rhetoric will not be tolerated."

"There is more than enough documented evidence to prove that NSJP espouses hateful propaganda against Israelis and Israeli supporters that no credible university would want to be associated with them," Aviva Rosenschein, the international campus director at the Committee for Accuracy in Middle East Reporting in America, told JNS. "The University of Minnesota at minimum should condemn the organization, providing its students with the assurance that they don't support intimidation of their students."

Excellent article. Thank you for printing this story on SJP. There are SJP chapters on many Florida colleges, including UCF and Rollins. See SJP interactive map here: https://www.nationalsjp.org/interactive-sjp-map.html