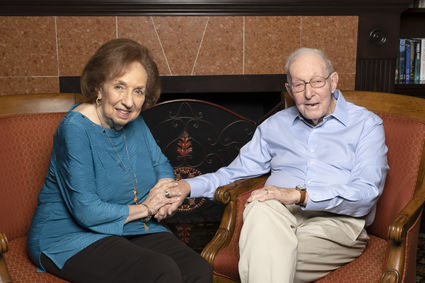 Herb Maneloveg and his sister Phyllis Maneloveg Kasrel grew up in a small home in Aliquippa, Pennsylvania, where their father had a store called People's Furniture. There were 20 Jews in the town and an Orthodox synagogue where they belonged. It was a very loving family. Their mother was a wonderful cook who prepared traditional Jewish foods. Holidays like Passover were celebrated with Orthodox grandparents where the seders were all in Hebrew and never ended. Kasrel's first memory was at age five when her sister Marcia was born during the Johnstown Flood.

The siblings enjoyed playing with their friends and doing anything that didn't cost money. Maneloveg played touch football and Kasrel played hopscotch. They both liked card games. They do not recall getting an allowance but Maneloveg remembers he got paid $.25 for mowing lawns. Both were Frank Sinatra fans.

When asked to describe Maneloveg's wife, Gloria, Kasrel responded "she was perfect. Gloria was my best friend." Maneloveg depicted her as beautiful, intelligent and a great mom. Kasrel also described her husband, Jerry, in glowing terms. "He was a wonderful gentle person and an excellent optometrist."

The siblings are the only sibling couple at Oakmonte Village. Prior to coming to Orlando to live near family, they both resided in South Florida for 20+ years.

The siblings were involved in BBYO and active in their synagogues. Maneloveg was extremely involved in multiple business associations. He received a plethora of awards in advertising and had the opportunity to meet President Lyndon Johnson and many other outstanding people as a result. Kasrel said that the New York Times referred to her brother as a "Media Maven." She suggested that he be looked up in google and there were many entries related to his success in advertising.

"We are very fortunate to have Phyllis and Herb at Oakmonte Village in Lake Mary where they are beloved and have contributed a great deal to life in the community said Nancy Ludin, executive director of the Jewish Pavilion.