By Ariel Kahana and Yehuda Shlezinger

Right-wing parties decide to stick together as unity talks flail 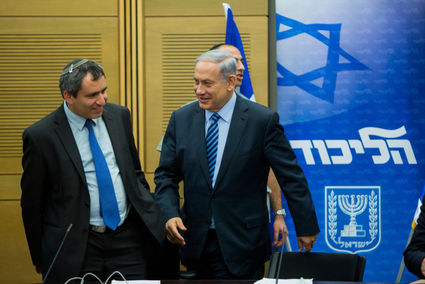 Israeli Prime Minister Benjamin Netanyahu speaks with Immigrant Absorption Minister Ze'ev Elkin during a Likud Party meeting at the Knesset, on May 18, 2015.

(Israel Hayom via JNS)-Israeli Prime Minister Benjamin Netanyahu met on Wednesday with leaders of parties from the right-wing bloc to discuss the future of negotiations to form a unity government after talks with Blue and White went south, with the center-left list pulling out of the most recent scheduled meeting to, in its officials' own words, "weaken" Netanyahu.

During the meeting, the possibility of Netanyahu giving up his mandate from President Reuven Rivlin to form the next government was raised.

Likud ministers Yariv Levin and Ze'ev Elkin argued that Blue and White's negotiation team canceled the latest meeting because Blue and White No. 2 Yair Lapid does not want party leader Benny Gantz to conclude a rotation agreement with Netanyahu, because he wants such an agreement with Gantz himself, in a government without Netanyahu.

The meeting ended with the party leaders agreeing to continue working together.