Foreign Minister Israel Katz: 'The days of the Ottoman Empire are over' 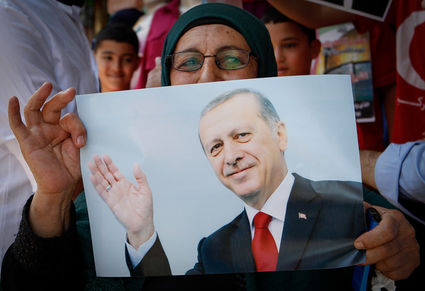 Palestinians holds pictures of the Turkish president Recep Tayyip Erdogan as they wear shirts with Turkish flags in the West Bank city of Hebron on July 20, 2016.

(Israel Hayom via JNS)-Israeli Foreign Minister Israel Katz has ordered his office to draw up plans to stop the Turkish government's efforts to undermine Israeli sovereignty in Jerusalem and protect Jordan's special status as guardian of Muslim holy sites in the city.

Katz intends to present the plan to Israeli Prime Minister Benjamin Netanyahu soon. Due to the sensitivity of the plan, the implementation of which will almost certainly lead to a direct confrontation with Ankara, it is also expected to be raised for discussion by the Security Cabinet. According to ministry officials, as the plan pertains to security matters, there is nothing preventing it from being implemented by a transition government.

The issue of Turkey's influence on members of Jerusalem's Arab population has weighed on security and diplomatic officials' minds for years. As Israel Hayom has previously reported, Turkish President Recep Tayyip Erdogan has been buying influence over sites and prominent figures in eastern Jerusalem for years. Jerusalem has not made any effort to challenge these efforts up until now.

The Foreign Ministry's plan would see the Muslim Brotherhood, which has close ties to Erdogan's Justice and Development Party, outlawed in Israel. Further ministry recommendations for thwarting Ankara's efforts include restricting the activities of the Turkish Cooperation and Coordination Agency, or TIKA, in Israel.

The organization, whose stated objective is "preventing the judaization of Jerusalem," spends some $12 million annually on activities aimed at undermining Israeli sovereignty in eastern Jerusalem. It should be noted that these activities are personally managed by Erdogan.

The plan's architects propose obligating TIKA to coordinate its activities with Israel in advance, preventing the association from acting unilaterally in Jerusalem. In addition, they propose stripping the organization head of his diplomatic status, rendering his presence in Israel illegal.

Additional steps would include restricting communications between members of the Islamic Waqf.

In preliminary discussions, Katz said, "We will not accept a situation in which the Turkish government headed by Erdogan acts to create centers of unrest and incitement in Jerusalem through funding and holding radical Islamic activities [inspired by] the Muslim Brotherhood and under the auspices and disguise of religious, social, cultural and educational activities."

Israel "will take all the [necessary] steps to pull the rug out from under the diplomatic basis for Turkey's activities in east Jerusalem in order to bolster Israeli sovereignty in all parts of the city. The days of the Ottoman Empire are over," said Katz.

According to Katz, "Erdogan's declarations that Jerusalem belongs to all of the Muslims are unfounded and baseless. Israel is the sovereign in Jerusalem, through protecting full freedom of worship to members of all religions. We will not allow any element to harm this sovereignty."

"Beyond that," noted Katz, "in accordance with the peace agreement between Israel and Jordan, the Jordanians have special status as far as concerns the holy places to Islam in Jerusalem, and we will not allow Erdogan to harm Jordan's status, as is happening today."