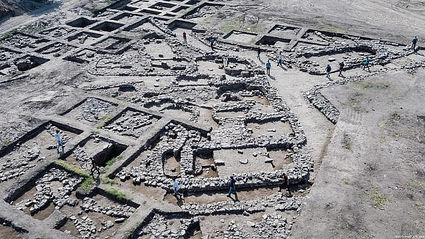 The remains of a 5,000-year-old city unearthed near Ein Iron in northern Israel.

(Israel Hayom via JNS)-A 5,000-year-old metropolis, the largest uncovered in Israel to date, has been excavated near Ein Iron, northeast of Hadera.

The city, which dates back to the Early Bronze Age (the end of the fourth century BCE), was surrounded by walls and included residential and public areas, streets and alleyways. It had an area of 161 acres and was home to an estimated 6,000 residents.

The Bronze Age metropolis was constructed on the remains of an even earlier city that dates back 7,000 years to the Chalcolithic Period. Two natural springs located nearby apparently served as the impetus to build communities on the site.

Some 5,000 teens and volunteers took part in the excavation under the auspices of an Israel Antiquities Authority project designed to instill an emotional connection to Israel's ancient heritage and a sense of belonging in the younger generations, as well as awareness of the importance of archaeological preservation.

IAA archaeologists Itai Elad, Yitzhak Paz and Dina Shalem, who directed the dig, said there was "no doubt" that the findings would dramatically change what researchers knew about the Early Bronze Age and the beginnings of urbanization in the Land of Israel.

"This was an exciting time in the history of the land, which was then Canaan, and whose populations underwent changes that changed the face of [the land] entirely. The rural population gave way to a complex society, most of whom lived in urban settings," the archaeologists said.

"These were the first steps the Canaanite culture took in the Land of Israel, which took on its own character in the urban sites it founded... A city like this could not have arisen without someone to plan it and an administrative mechanism that was responsible for its construction. The impressive planning and the fact that tools imported to [Canaan] from Egypt and seals have been discovered at the site are testimony of that.

"There was an enormous city here-a megalopolis in Early Bronze Age terms, where thousands of people lived, making a living from agriculture and who traded with other regions and even other cultures and kingdoms in the area."

Discoveries at the ancient city include an unusually large temple that features a giant stone basin used in religious rites and an altar on which burned animal bones were unearthed, proof of animal sacrifices. The dig also turned up rare idols, including one of a human head.

The surprising discoveries allow researchers to characterize the culture of the peoples who lived in the area in earlier times. The nearby springs and open spaces facilitated agriculture. The remains of the homes and public structures indicate an organized society with a clear hierarchy.

Like so many archaeological discoveries in Israel, the city was unearthed as part of the preliminary infrastructure work-in this case, preparations to construct a new highway interchange providing an exit to the newly developed city Harish, funded by the Israel National Roads Company Ltd.

Confronted with an unexpected ancient "New York," Israel National Roads has changed its plans for the highway and will build an overpass over the site to allow the city to be preserved in situ so researchers can continue to delve into its secrets.