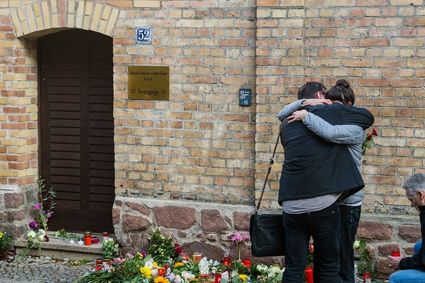 People mourn in front of the entrance to the Jewish synagogue on October 10, 2019 in Halle, Germany, Oct. 10, 2019, the day after a shooting attack there.

(JTA)-The identity of the German synagogue attacker may have sounded familiar to American Jews, who have endured multiple attacks by far-right extremists over the past year.

But the suspect's identity was more surprising for Jews in Western Europe.

The murder of two people in Halle on Yom Kippur was the first lethal anti-Semitic assault in decades in that region by a far-right extremist. Most of the terrorist attacks against Jews there over the past 30 years have been carried out by radical Muslims.

In that sense, Wednesday's shooting represents a tragic milestone for Western Europe, where growing radicalization among both neo-Nazis and Islamists is leading to what some scholars on anti-Semitism are calling a "perfect storm"-violent anti-Semitism stemming from both the right and the left.

"We see this perfect storm coming from different directions," Deborah Lipstadt, the Dorot Professor of Modern Jewish History and Holocaust Studies at Emory University, said in a speech in September, encapsulating the dual threat arguments.

The shooting suspect, identified as Stephan Balliet, 27, allegedly filmed himself killing a woman outside Halle's synagogue after he was unable to shoot his way into the building. He then shot dead a patron nearby at a kebab shop-one of many that have become ubiquitous across Western Europe, and which are often owned and operated by immigrants from Muslim countries.

During the assault, the suspect ranted about Jews, feminism and immigration-calling to mind the Pittsburgh synagogue shooter's social media posts about HIAS, the leading Jewish group that aids refugees. The German federal prosecution office called the attack an incident motivated by "extreme far-right and anti-Semitic" views.

Highlighting the emergence of the double threat facing European Jews was an incident days earlier in Berlin, when a man wielding a knife was arrested while trying to climb the fence of a Berlin synagogue. He allegedly shouted "Allah hu akbar," Arabic for "God is the greatest."

Statistically, there is some debate in Europe over the identity of the majority of anti-Semitic attackers. In France, Holland and Belgium at least, anti-Semitism watchdogs attribute most or all violent assaults to immigrants from Muslim countries or their descendants. In the United Kingdom, they account for about half of the incidents with known or identified perpetrators.

However, German authorities last year said that 90 percent of anti-Semitic attacks in their country were linked to the far right-a claim that has been disputed. Researchers told the Jewish Telegraphic Agency that the German method of categorizing the attacks is flawed: They cited, for example, a synagogue arson attempt by three Palestinians in 2014 that was not deemed anti-Semitic.

To some critics of the categorization methods, the process is politically motivated, skewed to bolster the public perception of Muslim immigrants in a country where immigration has been a hot-button topic for years.

From a pure numbers perspective, though, the Halle shootings were anything but unpredictable.

Last year, 14 people were killed in suspected anti-Semitic attacks in the United States, France and Georgia. The previous year, a Jewish woman was murdered in Paris and a synagogue torched in Sweden. In 2016, Islamist suicide bombers reportedly targeted Jewish and American passengers at the Brussels airport.

The attack in Halle could be a sign that European far-right extremists are ready to again target Jews for lethal violence. 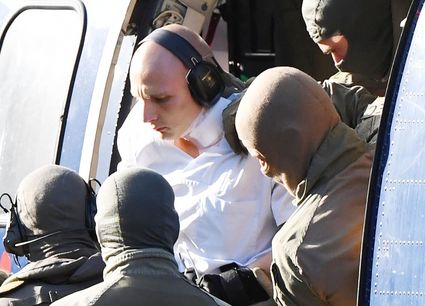 A person believed to be the suspect in the Halle shooting is assisted by policemen out of a helicopter after it landed at the Federal Supreme Court (Bundesgerichtshof) in Karlsruhe, southern Germany, Oct. 10, 2019.

Ultranationalists, whose cause has seen a surge in popularity amid popular discontent over the arrival of millions of Muslim immigrants to Europe in recent years, have been preying on other minorities for years, with increasing boldness.

In July 2011, Anders Breivik killed 77 people on an island summer youth camp of Norway's Labor Party. He said he wanted to prevent an "invasion of Muslims" and deliberately targeted politically active young people who he saw as "cultural Marxists" and proponents of multiculturalism. More than half of the dead were teenagers.

In 2013, a senior member of Greece's neo-Nazi Golden Dawn party killed Pavlos Fyssas, a rapper and advocate for asylum seekers. In 2015, a Swedish extremist killed three people at a school with many immigrant students.

That the Halle shooter perpetrated a terrorist attack on Jews is a sign that "All over the world, far-right, far-left and Islamist fanatics are stoking the flames of Jew-hatred," Gideon Falter, chief executive of Britain's Campaign Against Antisemitism group, told JTA.