Sephardic chicken soup with lemon and egg: A Balkan twist on the ultimate comfort food 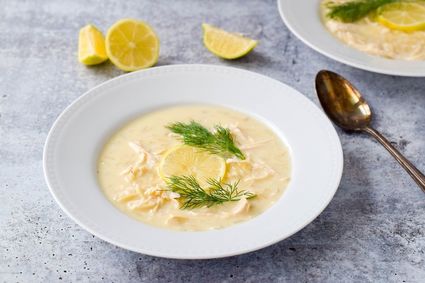 Sephardic chicken soup with lemon and egg, or sopa de huevos y limon, is a traditional first course for breaking the Yom Kippur fast among Jews from Turkey, the Balkan states and the Greek port city of Thessaloniki (known as Salonika in Ladino). This gently seasoned and comforting soup owes its velvety texture to tempered eggs rather than dairy, which makes it suitable for a meat meal under the kosher dietary laws.

Learn more about the Jewish roots of this dish.

2 1/2 cups cooked, shredded chicken, such as from a rotisserie chicken

salt and pepper to taste

1. Heat olive oil in a large Dutch oven over medium heat. Add onion and sauté until softened, about 5 minutes. Season with salt and pepper.

2. Add chicken broth and bring to a boil.

3. Add orzo to boiling broth and cook until tender, 8-10 minutes.

4. While the orzo is cooking, whisk together the eggs and lemon juice in a large, heatproof bowl.

5. Once the orzo is cooked through, reduce the heat until the soup is at a gentle simmer. Temper the eggs by slowly adding 1 cup of hot broth to the egg-and-lemon mixture while whisking. Then slowly add the tempered egg mixture back to the Dutch oven. (This will prevent the eggs from curdling in the hot liquid.) Note: It is important not to rush this process and whisk throughout, to ensure the eggs emulsify.

6. Add the cooked chicken to the soup and simmer until heated through. Do not allow soup to boil at any point after adding the eggs, which could cause the soup to break or curdle.

This recipe originally appeared on The Nosher.