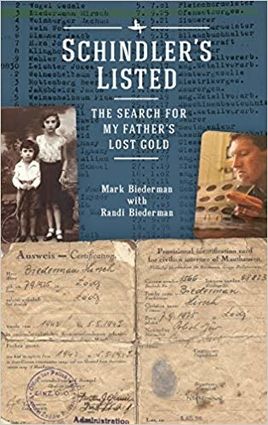 Mark Beiderman's sixth birthday was very lonely. He wondered why he didn't have more family to celebrate with, as it was just his parents.  When he asked his mom why there was no family around his mother said that the family were all killed by the Germans. This sparked his curiosity and interest in learning more about the Holocaust.

The entirety of his parents' family had been killed in the Holocaust, leaving him with no knowledge of his extended family, where they lived or their experiences before being liberated.

Biederman is the son of two Holocaust survivors, Harry and Sally (Lipschutz) Biederman, and author of "Schindler's Listed: The Search for My Father's Lost Gold," co-written with his wife, Randi Biederman.

Biederman will share the story of his 20-year quest to find gold coins which his father's family buried in their backyard in Poland just prior to being deported by the Nazis.

The book is written about Biederman's journey uncovering his parents' stories-his mother, a red-headed brave beauty who served as the cook for the infamous Josef Mengele, and his father, a skillful worker who breathed the same air as Hitler and Mussolini, and was the third person on Oskar Schindler's list.

One day as a teen, Mark stumbled upon a valuable coin and showed it to his father.

His father told Mark not to bother with that nonsense, and that the family had a really unique coin collection hidden in the yard of his old home in Poland It was buried just prior to being deported by the Nazis.   Biederman could not get an answer from his parents about the Germans, or the whereabouts of the coins.   Biederman spent 20 years searching for his family's coins, and found them!

For tickets and more information visit at www.JewishNorthOrlando.com/Lecture or call 407-636-5994. Sponsorship opportunities are available.

This event, as all Chabad events are open to the entire community regardless of affiliation.