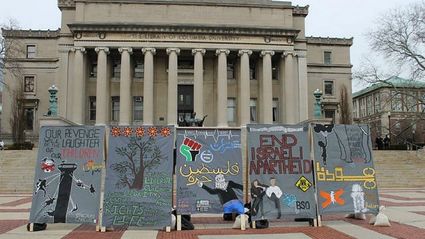 (JNS)—The American NGO Alums for Campus Fairness released a comprehensive report last week that documents what ACF describes as “systemic anti-Semitism and an ingrained delegitimization of Israel” at Columbia University and its sister school, Barnard College.

The 33-page dossier documents more than 100 incidents that have made Columbia and Barnard “a hotbed for hate” since the 2016-17 academic year.

The catalogue categorized each act into one of these categories: anti-Semitic expressions, meaning language, imagery or behavior that would be considered anti-Semitic according to the guidelines outlined by the U.S. State Department’s definition of anti-Semitism; incidents targeting Jewish students and staff; or activity related to the anti-Israel BDS movement.

In one such incident, Students for Justice in Palestine held a “die-in” on the Columbia campus in May and released a statement that condoned terrorism, denied the right to Jewish self-determination, and accused Israel of ethnic cleansing and genocide.

SJP also claimed that violence on the Israel-Gaza border was part of “a path which concretely spells out the racist objective of Zionism: to create an ethno-supremacist state with no place for the indigenous Palestinians.”

The report also reviewed “various bigoted and anti-Semitic statements, publications and actions” from Columbia and Barnard faculty and staff. ACF implemented sourcing and categorizing methods based on those used by the nonprofit organization AMCHA Initiative.

Avi Gordon, executive director of ACF, told JNS, “This report reveals the disturbing truth about anti-Semitism at one of the highest-regarded universities in the United States. In this time of increasing hatred against Jews, Alums for Campus Fairness believes that it is paramount that the public, media and policymakers have the tools to address this climate of bigotry.”